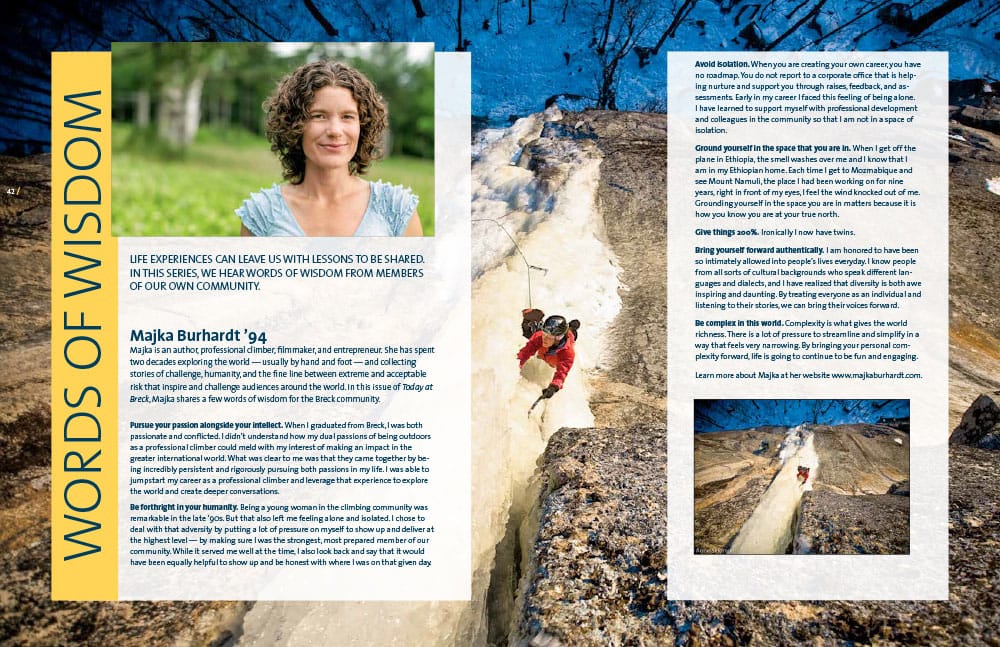 Majka Burhardt ’94 Majka is an author, professional climber, filmmaker, and entrepreneur. She has spent two decades exploring the world — usually by hand and foot — and collecting stories of challenge, humanity, and the fine line between extreme and acceptable risk that inspire and challenge audiences around the world. In this issue of Today at Breck, Majka shares a few words of wisdom for the Breck community.

Pursue your passion alongside your intellect. When I graduated from Breck, I was both passionate and conflicted. I didn’t understand how my dual passions of being outdoors as a professional climber could meld with my interest of making an impact in the greater international world. What was clear to me was that they came together by be – ing incredibly persistent and rigorously pursuing both passions in my life. I was able to jumpstart my career as a professional climber and leverage that experience to explore the world and create deeper conversations.

Be forthright in your humanity. Being a young woman in the climbing community was remarkable in the late ’90s. But that also left me feeling alone and isolated. I chose to deal with that adversity by putting a lot of pressure on myself to show up and deliver at the highest level — by making sure I was the strongest, most prepared member of our community. While it served me well at the time, I also look back and say that it would have been equally helpful to show up and be honest with where I was on that given day. M