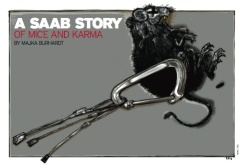 A Saab Story: Of Mice and Karma
(Part of an on-going series on my blog of posts from my column Whipped, for Climbing Magazine. July, 2006 Installment.) The longest road trip I’ve ever taken was in a two-door 1983 blue Saab 900. It was a fussy, impractical little automobile. The sunroof leaked, and the clutch stuck between fourth and fifth gears. The trunk was shot, requiring a ski pole to prop it up (even then it would occasionally crash down on your head in mid-pillage for a fresh pair of underwear).

Still, the little blue car took us — me and then-boyfriend Eli — everywhere. All of our gear nestled just so in the back, and during those three months we zipped around to the City of Rocks, Yosemite, Tuolumne, Joshua Tree, and everywhere in-between in perfect harmony. Well, maybe not quite perfect. You had to hold the groceries on your lap after a trip to the store. You couldn’t see out the back, resulting in a turn-on-the-blinker-and-pray philosophy when changing lanes. And then there were the mice — the damnable, stinking vermin.
Contrary to popular belief, mice aren’t cute or benign; they’re creepy and dirty. The first time I spotted their handiwork — in the wheel well of the trunk — I almost lost my granola. In a Saab, you maximize your storage space, and we’d stashed Eli’s grey oil-changing coveralls (nametag: Hank) and a special round of Polish chocolate next to the spare tire. We were just north of the Idaho border, headed for the City of Rocks, when we popped a flat. (For the record, I spotted the truck shrapnel before we ran over it. I wasn’t, however, the one driving.) And so, we reached into the trunk and came face to face with the enemy. Mouse turds decorated the spare like tiny blackheads, the coveralls had become a nest, and my precious chocolate had all but disappeared. Having just met a few months earlier and not yet desperately annoyed with each other’s not-so-endearing habits, Eli and I hashed out our situation.

“I was going to wear those coveralls when I changed the oil in California!” Eli lamented.

“That was my birthday chocolate!” I wailed.

Eli ran his thumb over the nametag; the “H” was almost gone. “Damn mice.”

I looked more closely at the chocolate; it was nibbled through on three of the four sides. “Bastards.” Eli put his arm around me, then said, “Let’s get ‘em.”

$3.98 and a quick trip to the hardware store later, armed with two wooden mouse- traps, we were ready. That night we set both traps, smearing peanut butter on the triggers. The next morning I opened the trunk to two dead mice, each with its head torqued grotesquely to the right, left eye staring vacantly at the metal bar that had brought this sudden death. Victory!

Then, 12 hours and one bout of hysteria (mine) later, we realized that the war had just begun. I’d been driving us to our campsite at the City when I felt the moist touch of what was probably a nose, followed by the searing prick of four tiny claws scampering across my flip- flop-clad foot. I screamed, releasing the clutch and slamming the brake, then wrenched the wheel violently to the right, running the Saab onto the shoulder.

“Mouse!” I said. “Foot!” Between hiccups, I explained to Eli what had happened.

“Whatever, Majka. They probably run across your face every night that you sleep outside,”
he said.

I scowled and pulled back onto the road, holding the clutch in a moment too long between first and second, making the car — and Eli — lurch forward awkwardly. I tapped my left foot all the way to the campsite so as not to be used as a runway again.

We developed a routine, coming together to fortify the Saab. Every night we would set two traps; every morning we would release the traps and bury two mice in the woods. We bought Tupperware bins in assorted sizes and shapes to protect our food and our clothes. We invested in easy-to-clean plastic traps with large, quick-release rectangular clamps that covered the dead mice’s faces. And we went on nest hunts, which resulted in fixing rusty pipes and leaky window seals, and stuffing the bumper with steel wool to remove any possible rodent habitats. But the turds continued to appear. We drove the Saab for another two years on increasingly shorter road trips, the mice, as always, along for the ride. Three-dozen mouse- traps, one chewed-through gas line, and two job offers later, we settled in Colorado.

And then I forgot to put the Saab in park, and it began its slow roll down our driveway, meeting its end in the
form of a large boulder. We mourned the Saab — really, we did — but we also bought a 1999 Toyota Extra-cab with a Leer high-rise topper, an 8-inch inflatable mattress, folding picnic table, two lanterns, and a rocketbox, which we filled with offwidth gear and extra pillows. And that was when the bad luck started. Monsoons in Sinks Canyon, snow in Index, rain in Moab. We became more adept at seam sealing our tent than sending our projects. Still, we failed to notice a possible correlation between our Saab story and the weather. Did it have anything to do with karma? I’m still not sure. All I know is that we were guilty of gluttony: wanting bigger and better, more gear, more convenience, more pitches. We’d become pissed-off climbers trying to out-drive the rain in our deluxe rig, while the Saab, filled with happy mice, reposed in a sunny Colorado junkyard.