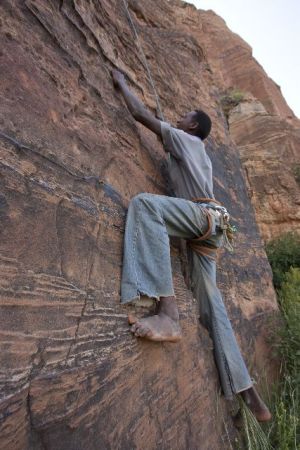 This is Haile. In 2006, I put Haile, and thirteen of his closest friends, in jail. In Ethiopian jail, to be precise. I’d like to say it wasn’t my fault, but then again, I was the one climbing in Ethiopia.

The story went something like this: Caroline George and I were three hundred feet up a crumbling sandstone crack in northern Ethiopia. Haile and a friend, having watched Caroline and me fight bushes and friable rock for three hours, decided the coast was clear and it was as good of a time as any to rob us—in plain sight. I had a bird’s eye view on the whole transaction—my camera, money, Caroline and my sunglasses, more money, a wrench—all of it systematically cleaned out from our packs. It would have been pretty smart on Haile’s part, except for my radio, a friend stationed at our car, and the entire Northern Ethiopian Government’s support and assistance with our climbing trip.

I’d never put anyone in jail before that day, and haven’t again since. It felt horrendous. Fourteen children in Ethiopian jail seemed too high a price to pay for any vertical ambition. But in the end, as the magistrate of the town of Megab told me, it was good to be robbed in Ethiopia. And, moreover, the kids were released, we got our stuff back, and I was offered a new understanding. It became a good story, part of a book and slideshows, and filler for awkward moments at cocktail parties. It existed in the telling instead of the actuality for four years…right up until last month when I was back in the Gheralta Mountains.

How do you ask someone if you’ve put him or her in jail? I would rather have never had to figure this out, but then I should have never returned to the scene of the crime. I saw a familiar face within ten minutes of parking our truck at the base of the sandstone wall.

I’d like to say I went straight for the direct question: Hello, you look familiar; did I put you in jail a few years ago? But really, I stalled. We were hiking up to the base of the rock wall over hand-built terraces cradling the lush remnants of the recent rain. This year was the rainiest in three decades in Northern Ethiopia. That’s a big deal anywhere—it’s a huge deal when you are in the exact land where one million people were killed in a famine in 1984. This year, new trees were sprouting in muddy soil, yellow flowers covered desert thorns on tree branches, and wheat, barley and teff fields undulated in the wind.

I talked to the familiar looking boy and a local militiaman about this year’s water instead of the past. But we all carried climbing gear as we hiked and talked. It was only a matter of time. We switch-backed our way to the cliff and I started to ask questions.

“Have there been a lot of climbers here before?” I asked. I knew of all of the other climbers who have been here since 2007—I emailed all of them logistics.

“Many women?” I asked. Every email exchange had been with men.

“Only once,” the militiaman said.

It was several hours, and several climbs, later when I finally got up my courage. Haile, as I then learned his name, had stuck around. I’d learned he was seventeen, had passed his grade ten in school, and had three siblings.

“The last time I was here,” I said, “a few kids…” I paused, I looked at Haile. We both lowered our eyes.

We looked at each other for a while. I glanced away at up the rock face, and then back to Haile. I said the only thing I could think of. “Do you think you’d like to climb?” Ten minutes later Haile was on the top of a new route in Ethiopia. I was there, after all, working with imagine1day helping to build Ethiopia’s future via its schools. It only made sense to start with Haile and my future first.