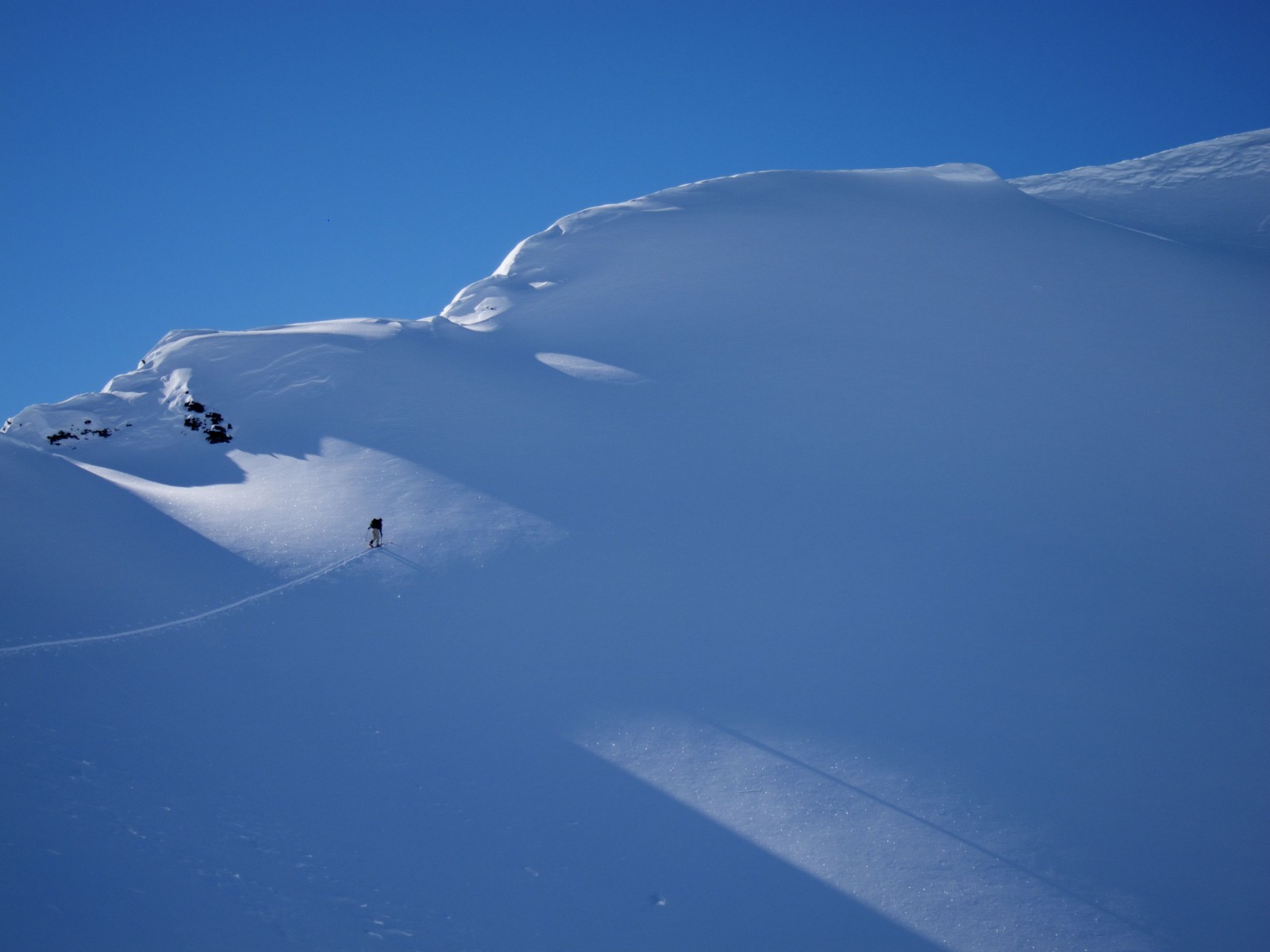 Peter Doucette heads up to get a down. Photo by Majka Burhardt

Fourteen years is thirteen too many to go between visits to Alaska. I sensed that every year that passed during my recent Alaska pause, but I knew it when I saw the landscape of mountains, pure mountains, and more mountains on the clear, still day I made it back this April.

How did you know you wanted to be a climber? When did you know the mountains had to be part of your life?  People ask me these questions all the time. Bottle Alaska and you will have the answer.

This April I was there backcountry skiing on the Kenai Peninsula between tides on the Turnagain Arm. The last time I’d skied in Alaska it was on nicked-over Mountain Noodles with my plastic Scarpa Invernos heading down the NE fork of the Kahiltna from an aborted climbing attempt on Mt. Hunter’s Moonflower Buttress. This time I had two pairs of powder skis and no objective other than turns. Or rather that, and holding my own with my in-laws-to-be. Total immersion in the mountains can happen in New England, the Appalachia, the Rockies, or in this case the Chugach. Anywhere it happens, total immersion keeps me honest. This year that honesty taught me two things: 1) sometimes the up is better than the down, and 2) it’s best to have the brightest skis you can find.

As a child, I grew up skiing on a sodded-over-trash-heap-made-ski-area—pure Minnesota style. Skies were for going fast, cutting gates, and holding edges. Back then I never imagined that skis could also provide ascension.  But as a backcountry skiing adult I’ve spent 90% of my time on skis going up on my skis. And, as a backcountry skiing adult on this Alaska trip I have realized that I like the up better than the down. Ok. That might be a lie. I like them equally. But I like them equally in the way my mother used to tell me she loved both my sister and me equally but differently, but I really knew that meant she liked me better. Alaska solidified this with seven days spent in the constant suspension that only snow can provide. That 90% was glorious (and, occasionally lung-searingly gnarly). That 90% gave me the time in the mountains I needed to be in the mountains. It gave me that feeling you get from the rhythm of the up and the feeling of lightness when you have the perfect line of planer ascent before you. It is that moment when you feel you can travel on top of anything and the mountains unfold in front of you with an offer of endless opportunity. We should all have more of it. Majka with the whiteout en route, Photo by Peter Doucette

Bright Beacons of Truth, aka Your Skis

Last year in the Canadian Adamants I converted to the Phat revolution (read the story here). This year, I had my very own pair of powder boards: chowder-seeking, rockered, 105 under-foot, sluicing green-apple rides of joy. The La SportivaHi5s were given to me for what I assumed was the blower powder I was going to ski. I thought that for four days of such powder–right up until I saw their true raison d’etre: the whiteout. The sluicing green-apple rides of joy were also the best beacon around in the white, white snow. I was skiing 175’s, a length I worried that was too long for me until I realized that the rockered tips would disappear over the drop off with just enough advance notice to tell me I would soon follow.  After a bit of trail and error, and sharpening of my reflexes, I realized I could use them to dictate my terrain. I would not call this what the skis were made for, but on the mile-long sidehill out of that day’s basin I would not have argued otherwise. A brightly colored future sister-in-law can also work—but it’s hard to keep up with mine.

Skiing is fun. It’s why I did it on a trash heap growing up and why I do it in the Alaskan mountains today. The trick is in noting the moments it gets more fun—and then making sure you are adding to your store of them as you go along. That could be the trick to playing in the mountains in general. I needed Alaska to help me remember this. I think (and hope) I will continue needing this for the rest of my life.