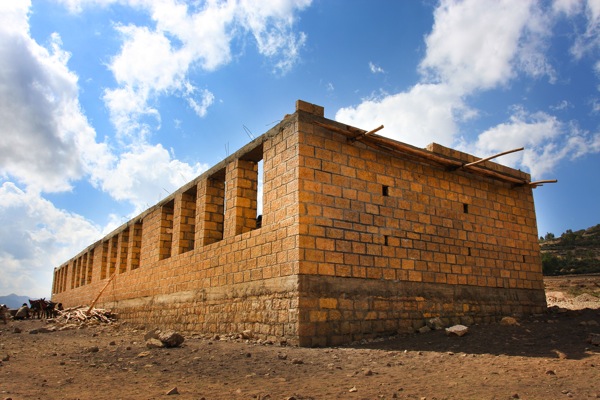 A blog in conjunction with Osprey Packs and Outside Television.

Let’s get this out of the way. I was 8. I made bad choices like singing Don’t Fence Me In at my father’s second wedding and lying down on the carpet in the school loft; I had bad choices foisted upon me, like a two-inch buzz cut—billed as a smart fashion move with the added benefit of being easier to treat lice (the loft). No wonder I felt sorry for the people in Ethiopia.

My older sister terrorized me, I had a boy hair cut, and glasses. They were starving, being relocated 400 miles away from their families and heritage, and in the middle of one of the most militaristic regimes in modern Africa called The Red Terror. I did what any person feeling a great sense of connected persecution would do. I wrote a ballad. I sang about helping the children, holding the children, as if I was not a child myself while singing. There are three minutes and thirty-five seconds of my most heartfelt worries about a place and people I only knew from grainy BBC imagery of utter desolation and haunted skeletal women, men, and children, always too many children.

Over a million people died in the 1984 famine. In Minnesota, our school lives revolved around it with full student body renditions of “We Are the World” at every assembly. It is that song I remember. I forgot my own.

25 years later, I went to Ethiopia for a story about coffee. I entered a country of extreme duality–both the poverty I expected, and bounty–agricultural, spiritual, and human–unlike I have ever known. It was supposed to be a three-week trip. Instead I followed a trajectory from coffee to a climbing trip for first ascents on sandstone towers and cracks, to a book that asked how adventure offers a lens for a deeper understanding of culture. I then got up in front of groups of six people to six hundred and tried out answers. I learned, and re-learned, how to ask the questions. And then, my mother found the ballad.

I had one lecture left for the Vertical Ethiopia: Climbing Toward Possibility in the Horn of Africa tour when she sent me an email. “Did you know you wrote a song about Ethiopia? I have it.” Maybe we all know who we will become as adults when we are eight years old. Maybe I am just lucky. Maybe I had to forget to remember. I cringe at my warbling 8-year old voice. At one point I surmise, in song: “They don’t even have a turkey.” To be fair, twenty five-years and five months of time in Ethiopia later, I was pretty dead on about the lack of turkeys. I was also pretty dead on about how much a person can care.

Six weeks from today, Imagine Ethiopia 2010 kicks off.  We’re heading to Tigray, the Ethiopian region at the heart of the 1984 famine.  That is where I climbed, where imagine1day is building their schools, where together we will create a new school. I will, undoubtedly see a lot of eight year olds. I might even see myself.

See the new children of Tigray in imagine1day’s video trailer: This is Our Story.