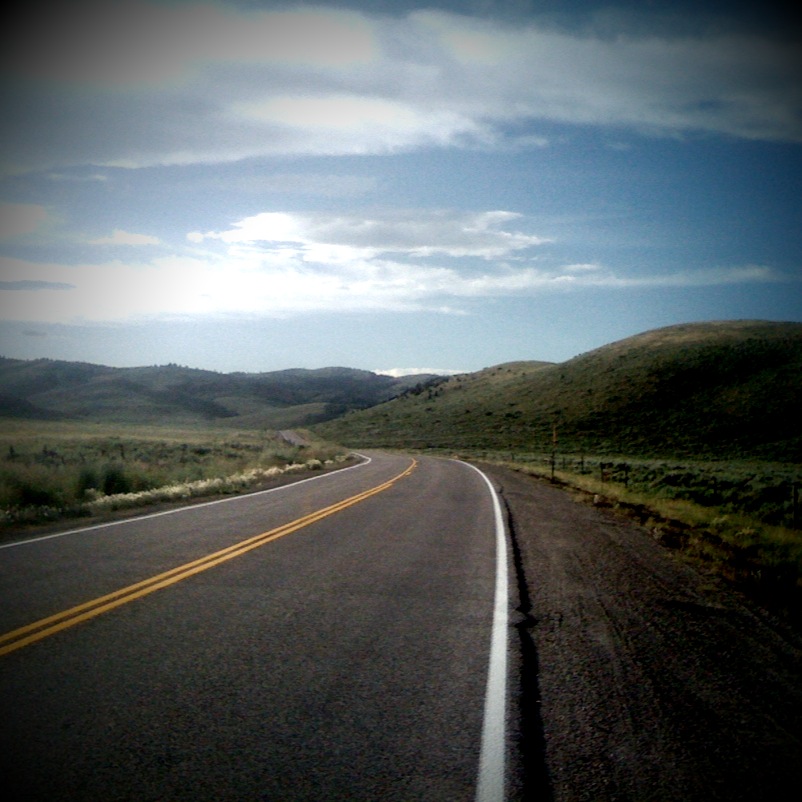 Getting closer to where I’m going

I’m at my second tire shop in a week, 408 miles apart. This time, I’m in Bozeman; last time, I was in Salt Lake. But it all started in Provo. 63 mph in the left lane, construction cones ahead, and something sharp enough underneath to land me stopped, rimless, on the shoulder.

Five minutes into changing my tire a man pulled over to help me. As we jacked the van up for the second time, only to have it rock and fall forward a second time when a semi passed, he offered his hand.

The undercarriage of steel crinkled against the jack- the paint job long gone. John had a broken printer in his car and we braced the back wheel against it to solve the rolling problem. Semis kept wooshing by.

When we were done, John looked at my Colorado license plate. “On your way there or back?” he asked.

I wiped tire grease on my leg and shrugged. “That depends on how you think of Wyoming.”

If you’ve flown through Dallas, have you been there? What if you drive? Walk? Paddle? Bike? What counts as a visitation, or an understanding? When I was in high school I was a backpacker and a paddler. I moved through wilderness at a human powered pace. Back at home in the city, I moved through life at a human-augmented pace. I always liked the summers better. Now, I’ve replaced the hiking and paddling with time behind the wheel of my van. I call friends and they automatically know I must be driving, because it’s when I have down time. They also know to expect the call to drop in less than three minutes.

I told Elizabeth last week that if I stopped moving so much, I would have time to learn how to play the guitar. She didn’t believe me—for any of it. But what she doesn’t know is that I have an Alvarez in my attic. What we both do know is that I’m not ready for it or any other instrument. Instead, I’m at Big O Tire, Bozeman. Turns out, the new tire I bought in Salt Lake has been recalled.

“We can order a new one for you,” a man named Paul says, “it will be here in three days.”

I look at the wall behind Paul and study the map of the US with Big O icons. “Can you call the store in Jackson?” I ask.

Paul looks at my receipt from Salt Lake City. I smile. “Jackson, Wyoming.”

Paul picks up the phone and soon confirms a tire will be waiting for me when I get back to the Tetons. I walk out of the store and wonder how many Big O’s I have in my future. I’m usually a small shop kind of girl. My mechanic’s name is Verner, before him was Merle. The each owned shops with their same names. These days I save up the van problems for Verner, for when I get home. But I need tires to get me there.

I pull away from Big O and start the drive east, south, west, and south again to Wyoming. The windows are down and Osito is in the passenger seat. He has cancer, it’s confirmed. He’s been milking it and earning special status wherever we go. He’s also as close to back to himself as I’ve seen in a month.  I’ve decided against sending him away to radiation camp or even aggressive chemo. For now, we’re healing each other on the road. We drive through Yellowstone the slow way—the only way you really can in the summer. Lightning breaks in the distance and Osito snuggles into his seat. We’re heading back to an unfurnished house in Jackson for the month of August and I’m on the hunt for a cookie sheet on Facebook.

Maybe I’m suffering the addiction of movement. Maybe I’m running. Or maybe I’m just a sucker for when the radio stations are static, the cell reception utterly absent, and the poodle is snoring beside me.