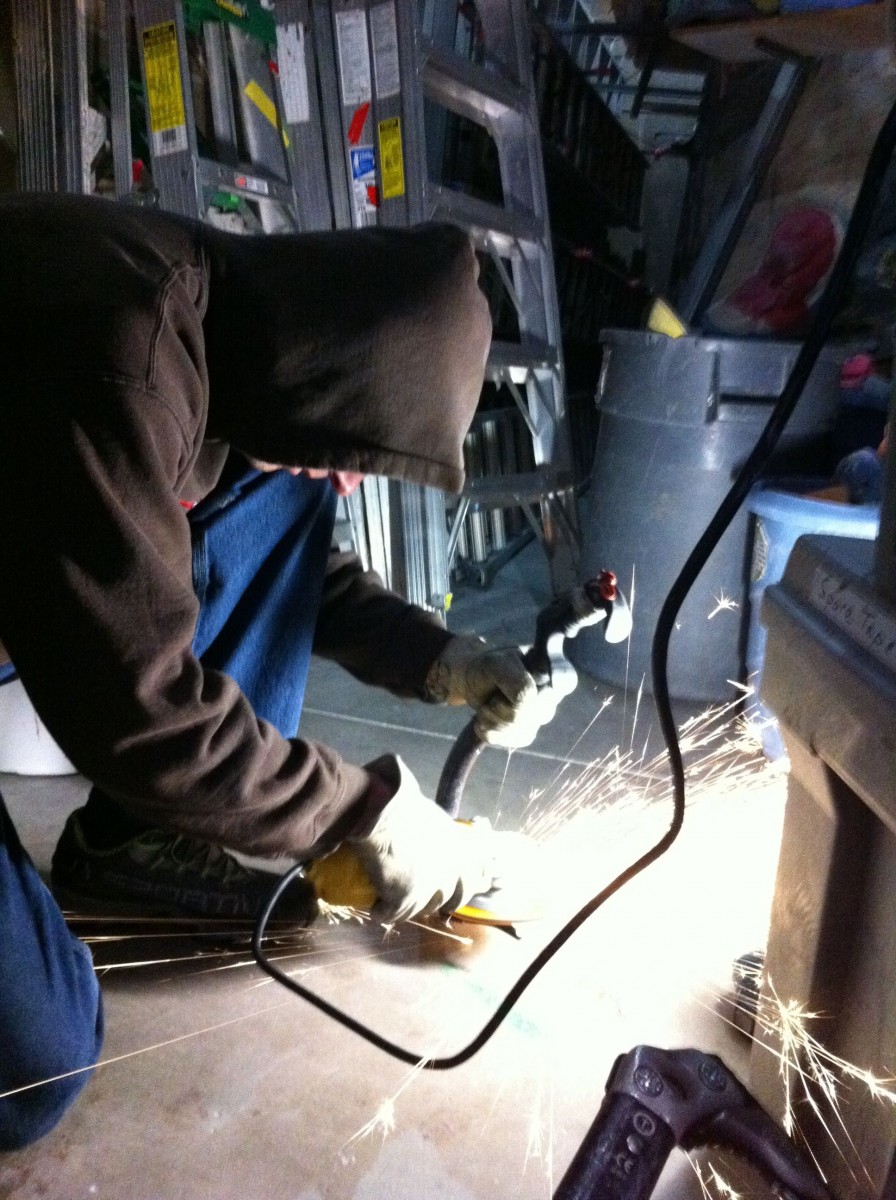 Filing picks down for dry-tooling in the Boulder Rock Club: Ice Climbing Prep 2010.

It’s November 26th. It’s 5 degrees in the mountains. It’s time to go ice climbing. To be fair, it’s been like this for a few weeks now. But it’s finally time for me to notice. I’m t-minus twenty-four hours from swinging into blue ice. It sounds glorious and exciting… and a bit terrifying. The question is: terrifying good, or terrifying bad?

It would probably be better not to talk about this—online, in a public forum, or even inside my head. It might be more effective to simply forge ahead and forget/ignore this anxiety. But that’s not how I operate. And besides, it takes so much blasted time to switch sports that you—if you are me—are going to have to get close to the deep dark thoughts just by virtue of the minutes spent preparing.

Last night I stayed up until eleven digesting turkey and sharpening my ice tools. I ran laps between my storage room, attic, and living room, I reunited boots with crampons, dug through bins to find missing gloves, and mourned the apparent loss of several pairs of long underwear. I was annoyed at the rigmarole for the first 98 minutes. And then I realized what I really was, was scared. And annoyed, as it were, at the fear.

This past February, I put away all of my sharp things early.  Actually, someone else—Peter, Peter’s mom, my good friends, a random stranger/neighbor, put them all away. I was bound for back surgery #1 and on total lifting restriction. Everything I owned was manhandled by others as a sign of help and caring. Everything I owned was then moved from New Hampshire to Montana, to Colorado. It took three-plus months for my stuff (and me and the poodle) to get to where we would rest: back home in Boulder. And when we all landed, we were set down and tucked into places I would not necessarily have picked. And I had to let all of this happen due to the unseen bummer/growth potential as a result from back surgery—the eradication of the inner control freak.  Ski boots were put next to tires, bikes alongside mirrors, it was a free for all for which I was grateful, and for which I knew I would be paying the price.

So last night I got organized. With each thing I put where it belonged I felt a little closer to my former self. And a little closer, perhaps, to a new self.

As an athlete it looks effortless to switch between our mediums—to the outside. But on the inside, it looks chaotic. But maybe it needs to be chaotic to give you time to catch up to the mental idea of the change. This year, I’m slightly further away from my winter sports then I’ve been in the past. It’s a bigger hurdle to go be cold, get warm in the cold, exert, have fun, ride the edge enough to be elated, and come home. This year it’s still feeling new to trust my back again. I’d tell a friend it was normal to be scared. I tell myself to get over it. But as I get ready, I sit in the mental stew between the two reactions. And I think it might be good for me. It makes this year different; it makes ice feel new and exciting and not normal and expected. And for god’s sake—hurtling yourself at frozen water isdifferent. No wonder it takes so much to be ready for it. No wonder we like it so much.