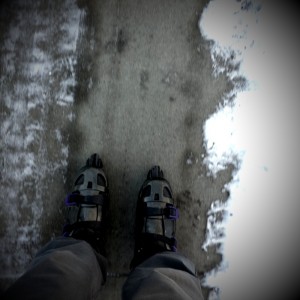 Yes, that is my shadow. I have yet to recruit a professional photographer to shoot my blading.

It’s January 28th. My new skis are tuned and fat. In Colorado today, like most days of the winter, the sun is out. The mountains are choked in snow. It looks like a fine day for rollerblading.

It was my Physical Therapist who started it. My back rehab has been going so well I thought I was ready to advance to skiing bumps. She suggested starting with rollerblading. “Have you ever done it?” she asked.

“Is the Pope Catholic?” I responded.

And within hours, I was bucking my blades instead of my ski boots.

My father gave me my charcoal and purple rollerblades in 1990. Today, the wheels are worn to offset, oblique angles–somehow all eight in the exact same direction. This makes me worry about possible postural issues, but for the past weeks I’ve reassured myself that the reason I am rollerblading in the first place is to fix my postural issues. Besides, from the first push off, it’s been like coming home. I’ve spent a decade plus watching the weather for which days to ski and which to rock climb during a Colorado winter. Now, I simply walk out my door and check to make sure there is not too much ice on the sidewalk.

Boulder, Colorado, is home to the uber athlete. All of them. In the three weeks since my rollerblading renaissance began, I have seen zero other bladers on the trails. At first I thought this was because it is January, and I am rollerblading in somewhat suspect conditions. But then I started noticing the looks I was getting as I whizzed past cyclists and runners, or, more often, they whizzed past me.

I am a fairly cool person: I wear prism belay glasses in the gym and own a recumbent bike. Based on recent conversations with friends (mainly variations on them asking me what I have been up to, my telling them about rollerblading, and them having to put the phone or beer down because they can’t keep it together through the laughter) rollerblading might threaten to put me over the edge. But I am not afraid. I am inspired. I am going to bring rollerblading back. I’ve started my passive recruitment by stepping up my style whenever I see another person on the trail. I show them the double ski-gate style move, or I go racer and crouch low and grasp my hands behind my back. I even did the first half of an in-line figure-8, but decided to wait to show off the second half until I could be fairly sure I could execute it without falling. So far, the only person who has seemed remotely interested was the woman in pink fleece pants and a mink jacket walking her shih-tzu.

I will not be deterred. I’m investing, in fact, in new blades. This may or may not have to do with my near collision with the semi-pro cyclist at the intersection of Goose and Boulder Creek Trails yesterday. It was the first time I have needed my brake—a brake that upon close examination is more of a smear of rubber over a fraying plastic disc. Said semi-pro’s yelling: “Get a clue!” was not the reason I came home and picked up the phone. I am a professional athlete. I take my gear seriously.

The first three stores I called kept the calls short. No, not anymore, and what? The next salesperson suggested I try calling “somewhere out east,” adding: “I think they still do that there now.”

Eventually, I got a hold of Danny, proud representative of two types of blades. One for the recreational rollerblader, and one for the professional. Did I know which one I was? He asked.

“Well” I said, “I’ve been doing it for over twenty years. So I’m pretty good—maybe even an expert.”

“So you would like me to put them both on hold for you then?” Danny asked.

Alas, sometime this weekend I’ll drive to a Denver suburb and slip my feet into 2011. But for now, I’m digging my time-tested blades. Just yesterday I was out in east Boulder when Madonna’s “Holiday” came on my shuffle. I started grooving along, just like that. It felt so natural, it felt so 1990. And then it occurred to me. Maybe the way forward for rollerblading is backwards. Not skating backwards—I don’t know how to do that, but retro-backwards. Lycra and leggings and side-ponytails. Cut off shorts and bikini tops and a yellow walkman. This, I have decided, is plan B. Plan A is wearing fleece lined tights, gloves, a windstopper hat and plenty of jackets until it’s warm enough for Plan B. Plan A might also include general improvement so that by the time anyone could recognize me, I’ll be the one they’re trying to catch.