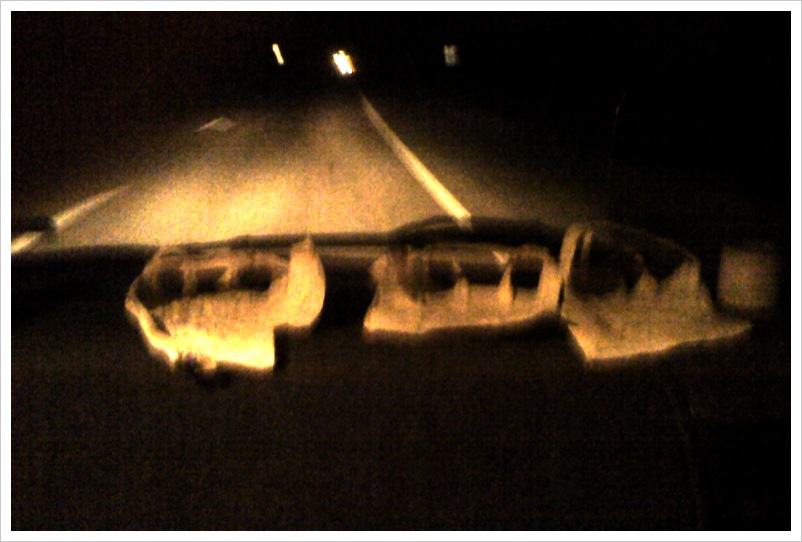 The trouble with having a blog is a sudden desire to take basic elements like your decision to go to Africa with shoes that suddenly feel too small, how to fix the squeak of your van with a wooden spatula, the death of your grandmother, the unexpected appearance of antivenin five months after you needed it, and an utter sense of self-imposed displacement equal only to the sleep-deprived elation of a new project, and put it together in a pithy way as some sort of logical explanation of life.

Instead, I think I might just talk about the rodents. They were the least expected. On Monday I gave my first talk about Namibia at Colorado College. Somewhere between addressing the conservation work and the climbing, I talked about snuggling rodents. It was not planned.

Up on the screen, there was a shot of Peter excavating what he later coached me to say “a large pothole.” Up on stage, however, I looked at the sunken muddy hole in the ground and all that came to mind was a coffin, for a raccoon.

I’m relatively good at thinking on my feet. I knew I should not talk about raccoon coffins with this crowd, and I should really not mention the coffin thought as a launch point to explain just why I have a current propensity to think of things from the lens of loss and the mechanics of death.

So instead I did what any well-trained public speaker would do.

“And this here,” I said, “is a hole that is just big enough for two little rodents to crawl inside…and snuggle each other.”

I flipped to the next slide. Beforehand, I may or may not have used my laser pointer to illuminate said snuggle spot. Soon, I was back to the subject at hand—Namibia. I would have fully forgotten about the slip had it not been for Peter.  A few hours later, driving north on I-25, he leaned over and patted my knee the way you do to someone whom you love, but someone who needs to be set straight. “Sweetie,” he said, “what was up with the rodents?”

Seventy-two hours later, I’m in Minneapolis, at dinner with my father and stepmother. It is hour six of a twenty-four hour stopover en-route to Ethiopia. My dad and I have been planning on this time, and he, as he put it, wanted to “take my pulse.” Since I was a child, I have understood this to be a poorly translated Polish expression for: grill your daughter.

My father starts by placing his elbows on the table and stretching his fingers.

“So, you left your house in Boulder,” he says, wiggling his pinky finger to represent, I am to understand, Colorado, “drove to Montana…”

“And now you have a home in Montana?” he asks. His pinky is straight, and still, perhaps to represent northward movement.

His thumb starts wiggling. “And then, a home in New Hampshire?”

I want to point out that if, technically, the pinky is Colorado then the thumb as NH makes no sense, and if NH is the thumb, then California should be the pinky, but certainly not Colorado.

His other hand starts to levitate and I know it’s about to be Africa.

My father smiles. He loves when I make his point for him. He grows quiet as he reaches across the table to hold my hands in his. “I just want to make sure this is what makes you happy.” And before I can reply, he adds, “It can’t make you happy. It is too much real estate.”

Though my father has never lived in Boulder, he, like many who live there, think of it as the center of universe. His daughter leaving that center seems unfathomable. We debate this, on 50th and Penn in south Minneapolis, 4,671 miles from, and ten hours past, the death of my grandmother in the my father’s family home in Warsaw, Poland.

Two weeks ago, Peter and I were heading toward our second take on a fall vacation. (You can read about our first at Edge Dweller). We were five hours toward Moab when my neighbor Sally called to say her husband Charley was not likely to make it another day.

In the last stretches of daylight, Peter and I had ensconced our hands in white athletic tape and blended the seams together to forge some layer of protection from the anticipated stone. Four empty shells looked out on the dashboard the whole way back to Boulder. Charley died the next day. For the following weeks, I packed up my house and touched every item I own as if shifting possession like sand through my hands. With each trip outside, I looked across the street and saw some memory of Charley. If he were there, he would have weighed in on my packing strategy. He knew about my plan, and he would not have been surprised that I had four piles in my bedroom: Montana, Ethiopia, NH, and Boulder.

Charley will never meet my dad, but if they had met, they would have had four hands to track me on, instead of two.

Maybe there is a phone app somewhere that will make sense of this all. It could graph me, predict me, explain to my father why his daughter, the one that was so hell-bent on building a home and having all of her things in one place when she was 21, now asks him to please hold onto her childhood dollhouse for just a while longer because she has no where to put it.

I don’t remember if, when I was little, I played house with singular focus, or if I made that house a home in a dozen different lands and landscapes. Or maybe I was like my niece and nephew who yesterday took my hands and led me into an entire mansion inside the space of my father’s guest bedroom. We had a kitchen, a garage with plenty of bikes, two dog beds, lions, and rocks to climb.

Right now I’m in Amsterdam. There is an automated female voice telling Ashtan Koohleny that he is delaying the flight of a plane to Dubai. If he does not come soon, they will proceed to offload his luggage. They don’t threaten like this in Denver.

Two flights to Warsaw have departed since I arrived. I am going to Addis Ababa, by way of Khartoum. My grandmother’s funeral is next week. My father will return to the land he left when he was twenty-one and start the process of understanding a new life without a mother, as a man who’s lived his whole adulthood away from his motherland.

And in the meantime, I will arrive in a foreign and familiar land. After this trip, I will have spent four and a half months in Ethiopia in the past four years. If you graphed it, it would be just as much of a home as I’ve had in that time.

My life is about to consist of bright red coffee cherries and hot African sun. I’d be lying if I didn’t say I was in it, right now, for the buzz.