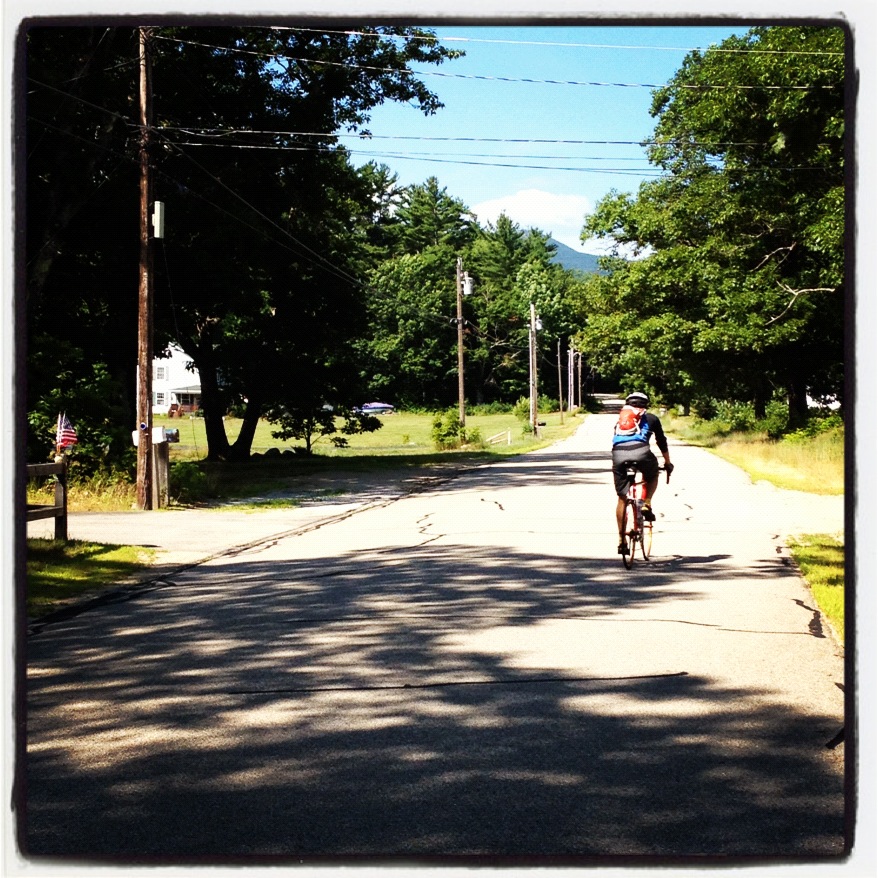 Dad, aka Kris Burhardt, out in front

One day, I will beat my dad at something. I’m 35. He is 70. It hasn’t happened yet. I thought I had his number when I had him out to New Hampshire to go bike riding and canoeing. Our day one bike agenda was 42 miles and 1,500’ feet of elevation gain, and I had a home court advantage. Plus, he was in bike sandals rather than shoes and had a too-long stem on a rental bike with sticky gears. He also wanted to carry a pack, in which I would, at mile eleven, place my jacket.

Let’s back up.  I don’t want to beat my father in malevolent way. It’s not even about winning. It’s more about matching him in some way. I’ve had a life of shared activity with my dad and I have yet to see him try. He is like the Polish Yoda. He just does.

We started our ride with an almond and chocolate croissant from the Vintage Bakery. Dad decided on one water bottle and only acquiesced to energy bocks after I told him I might need him to carry extra should I need more sustenance. That settled, I led us off onto the road and dad settled amicably into line behind me.

At mile 1.2 my father had seen enough to be declarative. “The White Mountains have great riding!” he said. “Fantastic!” he proclaimed. “Marvelous!” And right about when he told me they were, in fact, “Perfect!” he pulled in front of me and preceded to put down what I now think of as the 70-year-old-Polish-hammer. NH cycling, covered bride and all

My father is not a singer, unless he’s engaged in what to others would be considered an activity requiring exertion. In those situations, my father, instead of breathing hard, sings a tune. La-di-da-ti-ta-di-da. It’s those same seven notes, always. It’s those same seven notes running, rollerblading, skiing, snowshoeing, hiking, and biking. I’ve heard them my whole life. He usually starts singing them right when I start trying. In this case, it was right around mile ten, on the uphill, as he proceeded to pull a half-mile in front of me.

I watched my father and his bright red pack—my pack, actually—get smaller in the distance. I peddled faster. I breathed harder. And then I got angry. I was not proud of the emotion in the moment and nor am I now as I write about it. But it was right there—anger at my father for being such a dang good athlete and at the effort I would need to keep up. The ironies were many and inescapable. I usually consider myself a decent athlete—a professional athlete—and the Polish Hammer was dusting me.

By mile 20 I gave in and drafted dad. Together we rolled through the up and down. I kept an eye on his somewhat sketchy tendency for lateral movement and he checked to make sure I didn’t fall off his wheel. We rode in synch until the final 1,100’ descent on Bear Notch Road. There, while I drank ½ of my second water bottle and dad ignored his one bottle, still ¾ full, I asked him if he liked big downhills. He grinned and took off.

At the bottom of Bear Notch my dad waited for me expectantly. I pulled up, unclipped from my left pedal and shook out my neck. “I did 45 mph. At least,” he said, “maybe more. You?”

“You know what I would really like?” he asked. “I would love to go up that hill.” He half turned his front wheel for emphasis. “Should we do it?”

We had six miles back to the car and four days of paddling in front of us. I sighed. “Really?” I asked. “Really?” I clipped back in and turned down the road to the van. “How about we do it next time,” I said over my shoulder. Dad and Me. Aka Kris and Majka Burhardt

“Perfect!” he said, and twenty feet later he passed me, and I tucked back on his wheel. We peddled the last six miles in an easy cadence. With each full stroke I confirmed the truth– I really didn’t want was to be faster than him. Because that would mean something had shifted, and I am not ready for that shift to happen. “La-di-da-ti-ta-di-da,” my father sang. “La-di-da-ti-ta-di-da,” I tried out, under my breath at first, and then out loud.