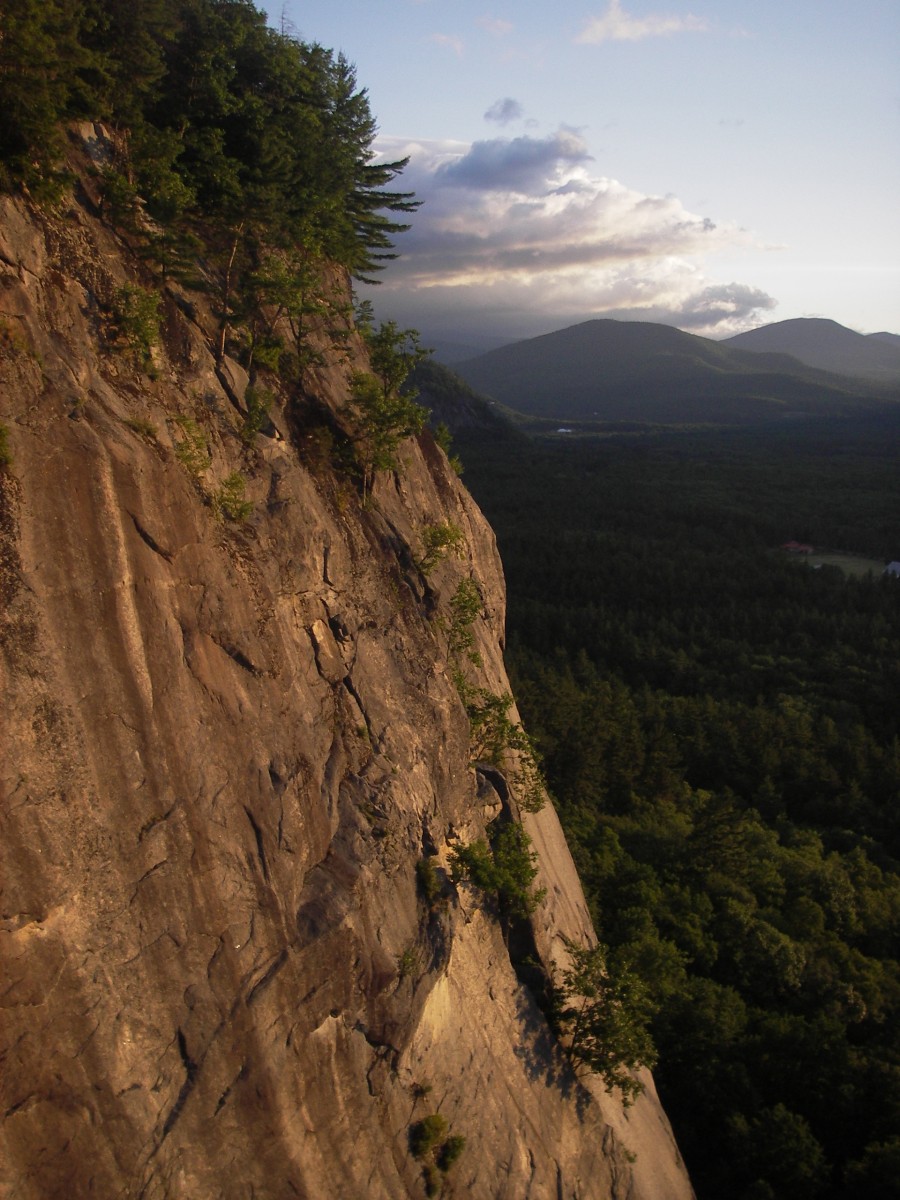 You might not believe what I’m going to tell you. You might—if you have read things I have written in the past months—think I have some perverse law of attraction with tragedy. But maybe the truth of it is that I am trying to turn the tragedy around. When you find a dead body on your second day of vacation, you might have no other choice.

Peter and I were in New Hampshire when it happened. We’d spent the day climbing cracks at Cathedral Ledge that started off wet at the bottom, behind the shade of trees, and turned crisp and dry when the sun hit their full depths up higher. By four we’d ditched our packs in the car and walked along the base to survey other routes. The ground was spongy with slick roots and cavernous leaf piles.

Peter saw him first, and put out his arm the way you do when you careen to a stop in the car, and you’re the driver, stopping, and want to keep the passenger safe, even though you know your arm will never accomplish that on its own.

I walked right through his arm. I walked closer to the man’s crumpled and twisted body knowing I might never forget the image or the experience, but knowing it was part of my life already. Over the next two hours, we brought rescuers to the man and ran trips up and down the trail with supplies. Each time I returned, the man became real to me as a father or a brother, or a husband with the receipt from the hardware store still in his back jeans pocket. He was not a climber, though I automatically envisioned him one with sticky rock shoes and a harness full of unplaced gear.  In the end, he was a man who’d driven to the top of the cliff the day before and made the choice to never return home.

A few nights before I left for New Hampshire, I went to an impromptu anniversary celebration at my neighbors. Sally and Charley were toasting their 37th year surrounded by a group of seven friends—none of whom were married. Charley held court on this fact, shaking his head at the rest of us in our 30’s and 40’s at some point along the decision course.

Sally told a story about their meeting and Charley piped in about the dress she was wearing. Sally corrected him. Charley turned to the group: “See that?” he asked. “ I have two choices. I can argue about it, or,” he shrugged his shoulders, “just say, I love her. That’s marriage—if you do it right.”

I met Sally and Charley four years ago in Mexico. They enveloped me into their makeshift family via surf lessons complete with stick figures drawn in the hot sand. It was two months after my marriage had ended. Since then, they have been my stalwart friends through singlehood, dating, and partnering. They know me. And that is why, at the end of the night of talking about choices and partnership, Charley looked right at me when he offered his last bit of advice.

“That’s what’s wrong with you people in your thirties,” he said, “you all think too much.”

Cathedral Ledge, New Hampshire, is not a stranger to suicide. The cliff stands sentinel on the flank of town and you can drive to the top and walk a few hundred feet to get to her edge. There’s a guardrail there, but intentions make that irrelevant. Because of the climbing that takes place at Cathedral, and the location, climbers, inevitably, are involved in the rescues when people take their lives.

A friend told me that over the past five times he’s been called to the scene of a death, he has realized that the people who take their life do so with two different paths—they scootch, or they jump.

Jumpers take the leap, arcing clear of the corners and trees until the final contact at the ground. Scootchers inch their way on foot, on backside, or on all fours, slowly toward the edge, and even past it as it rolls away. They tumble to their end. Jumpers are easier on the rescuers. They are still intact.

Am I trying to liken falling in love with suicide? I hope not. It seems wrong. It seems inappropriate. It seems astonishingly insensitive to the people who loved the man we found. But every morning since that Monday afternoon at Cathedral, I’ve woken up thinking of these things together. And no matter how hard I try for them not to, they keep lapping up against one and other in my mind.

I have not wanted to write about this. I have desperately wanted to write about this. There is little sense in the understanding or comparison. If we take declarative action, is it easier on others? If we should-I-shouldn’t-I, would-I-wouldn’t-I, our way through life, love, and action, what do we miss while we look for every option? Or what do we commit to without knowing the other side?

I tell my friends constantly that adulthood is not what I expected. My parents and all the adults around me just lived—or so I thought when I was a kid. I did not see the off-screen life of decision making, or weighing choices. I saw the results. Now I have to live on both sides.

I asked my sister why she married her husband. “I loved him. I loved how I felt around him.”

I had just told her I was thinking about going to therapy with Peter, not because we needed it for some particular issue, but just in case. I’d recently proclaimed that if there was some insurance policy wherein you could guarantee that the choice you are making in love is the right one—instead of guard against the wrong one—I would be its first buyer. And as I write that, I am ashamed of myself. What if Charley found out?

My mom says I used to be a jumper—and thinks I secretly still am. I think I am a jumper who scootches to catch up with herself.

Maybe we are always faced with these two options. Maybe adulthood is knowing which to do when. Maybe finding that man, twisted and crumpled but intact at the bottom of a 500’ cliff face was supposed to make me examine all of this. Maybe Charley would say I am examining it all too much.  And here’s the kicker: He—Charley—since that moment at the party, has gone from the person at the dinner table goading me into declarative action with love, children, and surfing, to a man in the hospital fighting a battle for life with a cancer that won’t let go. Explain that. Scootch that. Jump it.  Then again, if I said that all to Charley, he would probably tell me I needed a vacation, which, of course, is what I was trying to do in the first place.