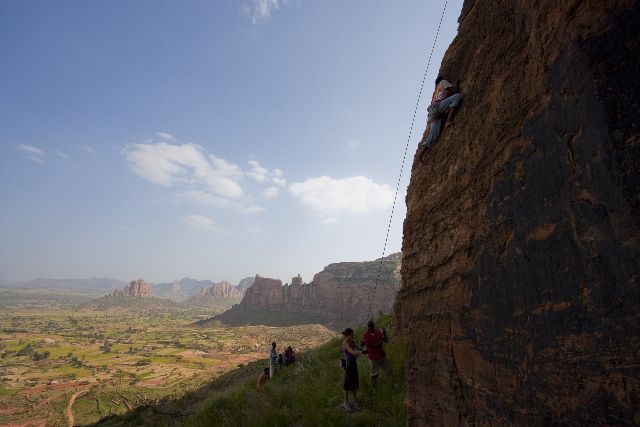 The bowels of the Addis Ababa airport are laced with sweet, thick exhaust. Five minutes ago–forty-five minutes before my departure back to the United States–a man in a sharp-creased navy uniform summoned me away from the fluorescent passenger holding tank with a gun holstered at each hip. He didn’t give me his name, just confirmed mine. Now I’m trying to keep up as he strides quickly over the oil stained concrete floor in the dim light of the airport underbelly.

I know what this is about, but I’m not about to tell the man. The gun. It keeps coming up in my travels in Ethiopia. The gun; and the forty pounds of metal with it.

The first time I went to Ethiopia, I brought along a climbing harness, shoes, and a chalk bag as a gesture of optimism. This time, four years later, I’d brought three duffle bags full of climbing equipment, but only one gun. I’d also like to take it home with me.

My two overstuffed Osprey duffel bags, flanked by two guards, mark a lonely destination in the middle of an otherwise empty floor. Under three watchful sets of eyes I unzip the biggest bag.

“Did you grow up in Addis?” I ask the man in the blue uniform.

By now I’ve gotten hold of the orange backpack that holds the prize inside my duffel. I start tugging it out of the bag. “I was just in Adrigat,” I say.

My speech—one month into this trip in Ethiopia—is well practiced and quick. “I was there working with schools in small villages. Do you know Wukro?” I ask. Abada?” I mention big and small villages and cities. “Near there.” The orange backpack is in full view; I reach in. “And in the Gheralta,” I add, “where the rocks are.”

“But there are good rocks,” I say, and I pull out the blue and black Bosch Annihilator. Top Roping at the Gheralta Massif, Photo By Peter Doucette

It’s a drill, not a gun. But we all know what it looks like in the x-ray machine. I plug in a battery pack, depress the trigger, and it whirrs in the silence.

I show 12” SDS drill bits, left over 5-piece expansion bolts, hammers, wrenches, a blow tube. I give the airport security staff a mini-bolting clinic in two minutes or less. “For climbing,” I say, again and again. “Climbing and schools. Ok?” And again, “Ok?” Soon, I have everyone nodding.

Four years ago, during that first trip, I was looking only for climbing for me. Climbing to get to the top of something spectacular, something undone, something iconic. This time, I was there to take twenty-three novice climbers to a high point in their Ethiopia experience. They were there, in turn, to take me to mine.

Imagine Ethiopia 2010 was about combining adventure and community stewardship. These participants shared with me the school being built with the funds they collectively raised. We traveled with the imagine1day team to visit a dozen more schools they had built or supported. I met a principle along the way who told me his school used to be called Mogadishu in honor of its desolation and lack of hope; now its students rank in the top of the district. One of these days, I tell myself that as I re-pack the drill/gun in my bag, I will travel light to Ethiopia. But for now, I stand next to my heavy bags and talk about education in northern Ethiopia with three new friends. They will be sure I get on my way when it is time. I will be sure to be back.

*The Imagine Ethiopia 2010 Expedition just ended, for Majka, on October 14th. Stay tuned for more stories about what happened along the way.

*Read about Majka’s first expedition to Ethiopia in her book, Vertical Ethiopia: Climbing Toward Possibility in the Horn of Africa

*Read More about the Expedition from James Mills at The Joy Trip Project.