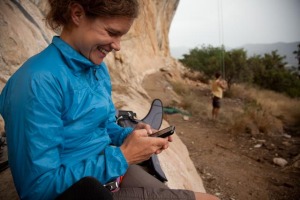 I’m sitting at a table under a grape vine, with a reverse pyramid of identical green fruit dripping from the vine. I’m in Spain. Even breakfast seems exotic. I’m here for work.

No one really believes me. Not even the gas station attendant. I walked inside his small shop to buy a Coke this afternoon and he asked me how my vacation was.

“Si,” I refused to wink back while I paid for my drink.

“Buen Viaje,” he said as I walked out the door.

Back at home in Boulder, my neighbors don’t even say hello to me anymore—they say welcome home, where are you off to next? Back at home, home—where I grew up—I call my sister at 9:30 am and she tells me how she’s already run sixteen miles, fed the kids, and had the locks changed. My days are successes if I can make it to a tiny Spainsh or French village with only one repeat trip per roundabout. It’s not good or bad or easy or hard, it’s just different ways to live your life.

Last Sunday, I stared at the ocean and pretended I could see all the way to Corsica. It felt normal, but also exotic—but maybe only exotic in the way it is perceived, rather than the way it is lived. I dragged my foot in the sand and wondered if traveling from Spain to France, with a dip in the Mediterranean along the way, was any more exotic than a drive from Minnesota to Wisconsin with a dip in the Mississippi.

Maybe what makes anything exotic is if it is a departure from our daily life. Maybe we are all just trying to be the same during our moments when we are most exotic.

Am I making sense? Does it help if I tell you that this whole thing started on the 24th when I flew away from the US on a plane and left an emotional landscape of memorial services and reminders of friends gone? That morning I pulled up facebook and saw Jonny’s name and photo as one of my six featured friends. At the airport, I scrolled past Andrew’s name to call Pete. What do you with the contact information of the people who are not in your life anymore? I didn’t have anyone to ask—I was traveling alone. So I crammed myself into an airplane seat, strapped on my noise canceling headphones, and pulled out a magazine to read about Singapore. I picked the simplest, silliest movie and watched as a young couple bought a dog, loved the dog, and had a family.

And then I watched as the dog died. I unleashed the biggest droplets of tears and snot of the past weeks straight onto the only shirt I had to wear for twenty hours of travel. Of course the dog was going to die—it was a movie about the dog. What dog won’t die? I watched the ending as we descended for an emergency landing in New York. The other passengers panicked about the fuel leak, the fire engines, the smoke. I watched Marly be put down. I swatted at my face. I kept crying.

At Andrew’s funeral, his brother Kyle told a story of asking Andrew why he traveled so much. “Do you like it?” He’d asked Andrew, “Really?”

Andrew was on his way to Africa for medical work and was heading to Alaska next, and had a Spinal Surgery Practice in-between. “Like it?” Andrew had asked Kyle, “as in all the time?” And then he said something to the effect of: “No way. But I like how it gives me a different take on life.”

I keep thinking of Andrew saying this—hearing him say it, even—and know it’s true. I think about being in the South of France, saying it in that breathy voice we all use when we say the South of France, and I think of those moments when it all just seems like life. Plain, ordinary, life.

To me, what Andrew was saying to his brother is that travel made him understand everything differently. Maybe those things are life in other places, but I think those things are life, in general. Our lives, how they all are exotic and normal. How they all have dogs that die. How they all have moments when you stare out your rental car window at the Spanish countryside and realize you are lost, or at your front door in Minneapolis and realize you forgot your new key, or when you take out your phone and thumb past the names of people that you won’t ever see again, even if you miss them and go home.