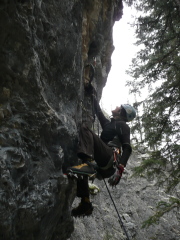 Sarah H heading into the steepness

Up until five years ago I climbed with men more than women. It wasn’t a conscious choice, it was just what I was surrounded by. These days it is almost the opposite. Maybe some of that has to do with the murkiness that surrounds cross-gender climbing. With women, it’s relatively simple. And it’s getting easier. But it is still surprising when you get to go out and dry tool with three other ladies.

A few weeks ago, Sarah Garlick, Sarah Hueniken, Julia Niles, and I all went up to the Playground, outside of Canmore, Alberta. It was snowing, the ground was muddy, and there was no ice. But there was not supposed to be. What there was, was bolts. Lots of them. And pick holes and scratched over edges, steinpulls and slightly expanding flakes.

I pick women to get out with on big trips, on weekend climbing missions, and on half-days at the crag. Julia was just with me in South Africa last year (see current issue of Climbing Magazine for the article), three of the four of us dry tooling that day had recently been in the Black Canyon together. How did that happen?

I watched Sarah H float and pull her way up a M9. I watched the rest of us follow. I watched and felt lucky that these women are out there and I get to be part of their group. I didn’t have that thirteen years ago when I was first climbing. Back then it was mainly men, with the occasional woman thrown in if I was lucky. Back then I used to also pretend that it wasn’t any different to climb with women.

But I was wrong. Setting out that day we had four women and over 96 points between us. It was different. I used to fight for people to say humankind instead of mankind, I used to, I am sorry to say, spell it womyn (though only for one year in eighth grade). I used to fight so hard for it all to be considered the same. I thought if I didn’t fight for that I would somehow be inferior. I did push up contests with any boy who wanted to go to the mat from age 8-15. I fought. Now I call up another woman and go climb.