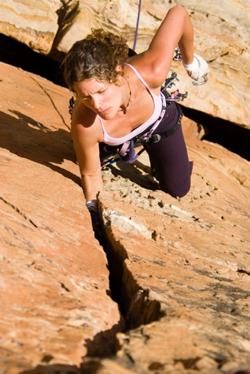 Majka Burhardt on a bit of decent rock in Ethiopia, 2007. Photo by Gabe Rogel

In Conjunction with Pemba Serves

Five days ago I drove out of Eldorado Canyon after seven pitches of climbing with two professional women who live in Boulder. We’d spent the day climbing sandstone cracks freshly crisped by the proceeding evening storms. The river roared beneath us for the full day making communication difficult and creating isolation of judgment and choices for each of us while climbing. It was a day where climbing was climbing – the complete pairing of mental and physical connection dialed together by focus. As we drove away from the perfect day Tracy and Amy planned future objectives and talk circled to fall climbing plans. Tracy and Amy talked about Colorado; I brought up Ethiopia.

This fall I’m co-leading the second annual Imagine Ethiopia expedition. During the trip we will rock climb, mountain bike, do yoga, and further the path and possibility of Ethiopia’s education. And is if that was not enough we will also explore Ethiopia’s coffee heritage and help celebrate one of its greatest economic drivers. I’d like to say it will just be a standard 14 days in Ethiopia, but I’d be lying.

I first went to Ethiopia in 2006 to search for a rare coffee and stayed for the climbing. The climbing, it turned out, was horrifically soft and loose—two characteristics no climber ever wants to have separately or together. Still, I and four other climbers stuck out what we could, made it home, and then I was supposed to write a book about it.

The book had been commissioned before we found out about the rock quality. I’d set off on the trip thinking I would have glorious climbing experiences in Ethiopia. They’d be difficult, but it would be the good difficult—the kind where you triumph over risk. This sort of triumph was at that time what fueled my climbing—I loved the moment when I would commit to a route, extend further in the backcountry, push harder in some way to get to the place of the unknown. I fed off of the intoxicating moment of tipping into that unknown, and the corresponding sense of rightness when I could pull it off.

But then I was climbing in Ethiopia where it was hard to pull anything off except for the physical rock itself, and I was supposed to write about the success of it all. The project was doomed. Or it was until I started talking about it. I told friends, neighbors, and strangers about climbing in Ethiopia and soon realized that what I was really telling them about was Ethiopia. Climbing was a fraction of the conversation, and one becoming smaller by the moment when I realized what drew people’s interest. It didn’t take long to then realize that I’d been putting the emphasis on the wrong part of the story. It’s five years later and I have another book about Ethiopia coming out on August 6th. Coffee Story: Ethiopia is the first book ever to chronicle the culture behind the commodity of coffee in the country of coffee’s origin. I have small aspirations with it—such as changing the economy of Ethiopia.

Do I sound crazily optimistic? Good. Just as I believe a book on Ethiopia’s coffee culture can change Ethiopia’s economy I believe climbing can create massive impact in the world—via the climbers. Just like the boaters, the skiers, the runners, the paddlers and even the rollerbladers* can.

That feeling of triumphing over risk I spoke about is present daily for me when I create possibility in Ethiopia. And it’s contagious. My co-leaders and the participants of Imagine Ethiopia 2012 feel it too.  It’s why we are all together doing this fabulous trip and raising $100,000 to build a new primary school in a remote rural community in Tigray, Ethiopia.  We’re not doing it because it’s the right thing to do in some esoteric way. We’re doing it because it feels right with each step—just like the perfect climb.

If you adventure in any way chances are high that you would like to have that adventure feeling more in your every day life. Who wouldn’t? I used to think that this always meant I needed more outlandish adventures. But now I know there are other ways to create that elation. And I know when I find the right way when it feels just as good as that moment when you pull off a heady choice in the outdoors. It’s the click. The click of making it and of it making you feel more like you. I spent years thinking I could only find this outside, and now I find it was actually the thing I could use to know what was right in the rest of my life beyond the outdoors.

Tracy and Amy might not be able to join me in Ethiopia in body, but I bet they are going to join me in spirit. Most people want to. You can too. Or you can get fired up about another project and place that creates that click for you. I’d love to know about it.

*Rollerblading is making a comeback.

Coffee Story Ethiopia
What if a food crop could change a nation’s future?
Pre-order the book, watch the trailer, read an excerpt,
believe in changing the world.

Imagine Ethiopia 2011
Support the school, become on of the final participants on this year’s team, catch more inspiration.

Vertical Ethiopia: Climbing Toward Possibility in the Horn of Africa

The book that started it all.