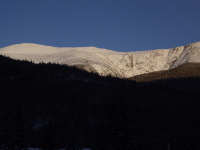 The other night, while speaking in Amherst, I was introduced as living in North Conway. Just like that, three months in, and I am from New Hampshire. The woman who introduced me had no problem uttering this statement; good thing she is not me.

I came east on December 1st, and for the next month, when people asked me where I was from, I would say Boulder. In January, when faced with the question, I would give a multi-paragraph answer than ended up translating little more then the feeling that I did not know the answer. Now, according to the folks in Western Mass, I am from New Hampshire.

Really? Likely not, if you ask a person who is really from New Hampshire. But possibly, for me, more than Boulder.

What makes a place home? I moved to Boulder 1277 days ago. Since that time, I have never spent more than twenty-two nights in a row in my Boulder bed, and have spent more than 50% of my time away. I’ve lived in NH for 105 days. I spent the first forty here in a row, and all but ten here since—albeit with Colorado

Isn’t there a Diggable Planets song about this? I think I used to sing it when I was 17, when there was nowhere else I could ever even think of claiming to be from except Minnesota. Back then I used to envy the kids who were transplanted into our school from exotic places like Tallahassee, Frankfurt, and Wichita. Movement seemed admirable—tough—better.plates. No wonder people ask me where I’m from.

Now I am a consummate mover. To myself, I have a home and I like to point out that I own a home, but lately people have dismissed this claim via a reciprocal observation/statement that owning a home in an area is not the same as living in that area. When my sister first said this to me I thought she was being unjustly harsh, when a stranger said it to me, I realized I was being unjustly dense.

I came home from that event in Amherst, having finally been located, and started packing up to move back west. It wasn’t retaliatory. It was time. I’m going back to Boulder, for a moment, and then on to somewhere else. Soon, I know, the question will come up. Where are you from? I might try and be difficult and dodge the answer. Or, I might just tell the truth and say I’m not sure where I’m from, but I’m certainly trying to figure it out.