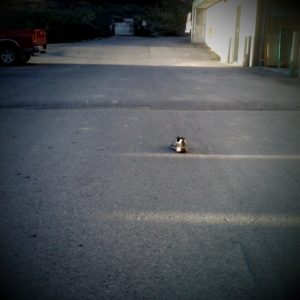 Sure, I lived in an unfurnished house on No Name Alley while strangers called my home in Boulder theirs. I ate my meals sitting on the floor while they ate at the dining room table my mother made; I leaned against a dusty log wall and watched movies on my laptop while they sat on my purple velour couch and watched a flat screen. And I worked, every day, perched on a metal folding chair pulled up to a vinyl-covered card table. But that makeshift desk was perched in front of window where, if you looked past the hospital, the highway, and the hills, you could see the top of the Grand Teton.

Three weeks is about my tipping point to form attachments—to place, people, or project. I was in Jackson for eight. I saw the mosquitoes come, breed, and go, I saw my dog Osito get diagnosed with cancer, be told that I would have to syringe feed him, and see him re-learn to use his tongue and feed himself. I was there long enough to have a friend visit, and to have her be the one who shared the news of the loss of Craig Luebben, my fourth good friend to die in the mountains in three months. I was there long enough to get a late fee on my brand new library card.

I paid it. And then I left.

Or, I tried to. My van acted up—I got a flat in our driveway, the spare had a flat, the heat pan got knocked off. My heart acted up, too. Because here is the thing: I was in Jackson, as it turns out, for a man. I hate admitting this. It’s somehow embarrassing to my feminist perception of action in adulthood. Sure—I worked in Jackson, I guided for Exum—or that’s what I told/tell people. But really? I sat at that card table and watched the weather change on the Grand while I typed away on my projects. I could have done that anywhere—but I did in Jackson because Peter was there. And so it makes sense that on my last night in town, after a day of van maintenance, that I was trying to get back to Peter for a final evening together.

It was tourist season in Jackson—an easy excuse for poor driving, over-consumption of sweets, and regrettable decisions on wildlife art. I drove through town thankful I was leaving the mayhem while people honked up and down the street. The van was loud, but it was a van, and it was having issues, and so I didn’t question the road noise until I took a sharp right turn and felt air woosh across my neck. The view in the rearview mirror looked suspicious. I pulled over. The back door—a 8X6 foot panel, in this case– had swung wide open, with all of my disorganized trappings of life perched in the exposed shelf. Based on quick math, and my recall of the last time I had opened the back, it had been splayed wide for five miles, at an average of 35 MPH.

I closed the door. I called Peter to tell him I would be late. I retraced my steps.

I’d like to say this was shocking to me. I’d like to say something like this has never happened before. But there was that time in Namibia, three months ago, where Kate Rutherford and I thought that all of the odd looks we coming out way were due to being two women in a truck. It turned out then, as it did now, that the latch of the back had failed (by my not shutting it) and we’d driven through a tiny town on dirt roads oozing climbing gear from our Nissan.

Last week, in Jackson, I drove back to the garage and realized I had no idea what I was looking for in the road. I was in the middle of packing when I had left. All of my stuff, some of my stuff, or none of it, had made it in the van at this point. Every time I tried to remember what was where, fuzzy images of other packing ventures in the past year intermingled with my thoughts. All I could do was trust what I found in the road. And all I found was nothing—until I took the last turn into the mechanic’s driveway and saw the shoe.

Peter didn’t believe me when I told him back in the house on No Name. “That’s all you lost?” he asked.

“Just promise me you won’t be a pilot.”

We spent the rest of the night wiping down cabinets, scrubbing the tub, and cleaning our rental home better than I clean my real home. We crawled into our bed—a combination of three thermarests, two foam pads, and one air mattress all cinched together under a fitted sheet, and went to sleep. The next morning I drove away, with the back firmly locked. I kept my shoe in the front with me for the whole 8-hour drive home. I don’t know what it means. It seems more important that it was not the right shoe. It seems important, in a threatening way, that it was not both. It was just one left shoe. Facing away, ready to run, ready to go, ready to be found.