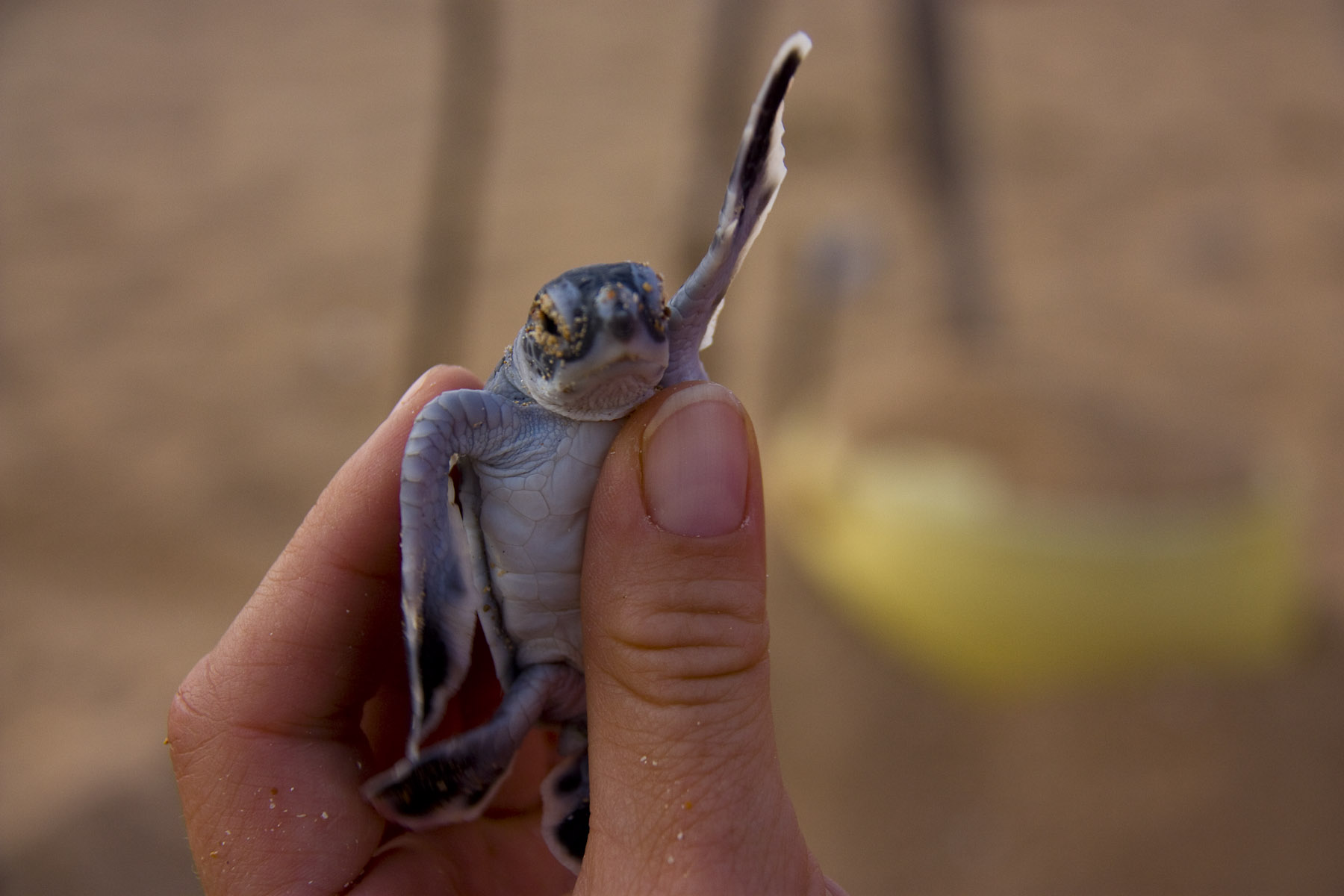 Osito is a poodle, which may explain why he’s never been an animal person. I’ve tried to convince him otherwise over the past ten and a half years. We’ve gone through cows, hippos, squirrels, and a warthog, but these are all temporary fascinations of mine, and of little consequence to the poodle. Somehow, I thought the turtle would be different.

It started in Kenya. This past October, Peter and I were on the northern coast, on a sunrise jaunt to 16th Century ruins, when our guide Eddy asked us: “Do you want to see the turtles? Fresh turtles?”

The waves were broiling gray with beauty in their breaks and garbage in their bellies. The shores were filled with plastic bottle rings, wrappers, golf balls, and flip-flop shards. “Where?” I asked.

Thirty feet off shore, over a sand rise, a man perched over a hole and dug into the ground with his hands.  Inside, a hundred newborn turtles the size of chestnuts blindly crawled over each other and their discarded shells. “Careful of the dead ones,” the man said, pointing to a mound of lifeless or slow moving flippers on the side. He covered those with a handful of sand, and reached inside for a live one for me to hold. I grasped the hours-old turtle with her white underbelly between my thumb and forefinger. She put up with it. She tried out the cool air and wind-milled her flippers in opposite and unsynchronized directions. She bobbled her head in an effort to see through still unopened eye slits covered in sand. I was in charge of her until I slid her back into the two-foot-deep hole with her dozens of brothers and sisters. She was covered in sand, and left to grow up—hopefully strong enough to leave the hole and join the ocean.

Right about now, I could talk about ocean health and green turtles and all the amazing things they do. But this is not a story about a turtle; this is a story about a poodle. A poodle that I tried to convince to be like a turtle, via a frog.

People wonder how I have a dog. Sometimes they ask, sometimes they realize it’s rude to ask. I usually answer regardless. “I have friends,” I say, “good friends. And a poodle that’s easy to love.”

For me, it’s that simple. And it works, because there’s Pete, who gets the double cheeseburger deal and gives one to Osito. Who, when asked, via text from NH, how long it takes a poodle to eat a cheeseburger, told me five seconds flat. And that’s with mouth cancer. There’s Leigh, Deanne, Gannet, Katy, Elizabeth, Alec, Amy… and that’s just the last three months.

For over a decade a village has raised the poodle—a village that moves and reforms wherever we go. In the past eighteen months, the care has changed. There’s the cancer, and two torn knees. There’s the stairs they he intermittently can’t get up or down. But there is also the will of a poodle—something I’ve started to infuse with the hope of a turtle. When I returned from Kenya I set about teaching Osito how to make the sign of the turtle. Since he was diagnosed with cancer I’ve been telling him he’s a baby poodle. Seeing as he was not supposed to make it more than two weeks, 1.5 years ago, it’s clearly working.

Poodles are smart. They learn quickly. However, I was building a house when I got the poodle and unfortunately instead of learning tricks, Osito learned how to chew on drywall and how to not wander in the line of fire of the stucco gun. Thankfully, the sign of the turtle is fairly simple and involves lying on your back and extending your paw/flipper/hand in salute.

Osito wont have it. Day after day I rub his tummy and gently maneuver his paw. But always, at the last minute, Osito rebels. A few weeks ago, I realized he might not want to be a baby turtle. So I bought him a frog.

It’s hard to find a good stuffed turtle in Boulder. That’s why we have Frog Named Turtle. He’s green, and has to do with water. He’s the new house mascot. Osito is indifferent to him. I have a subversive Frog Named Turtle campaign, tucking him under Osito’s paw while he sleeps, sitting him up against his belly when he’s awake. With two bum-knees, the poodle’s a bit slower on the go, and so mostly he puts up with it. Occasionally, though, I have found the frog named turtle stranded in the corner of a room, legs akimbo, alone. And then I wonder. Poodles—giant, magnificent ones with brilliant hair cut all the same length—are not supposed to live forever. I understand this as I deny it. Life balances death, and death balances life. I felt all of this on the beach in Kenya, when all I wanted to do after holding the baby turtle was see my poodle. It’s three months later and I’m not ready for Osito to shift his balance. And so I work with the hope of a turtle that’s really a frog on a poodle.