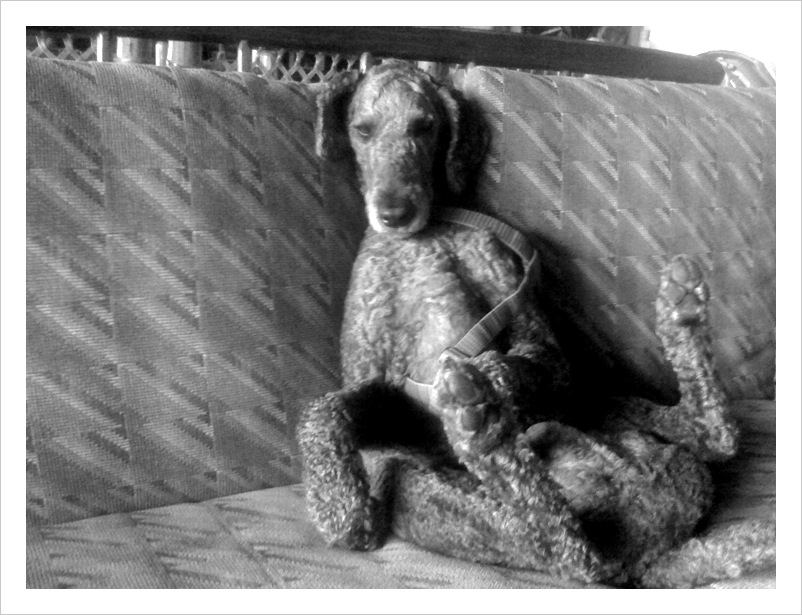 I’m not a dog person. I never have been. I once knew a woman who returned a dog for its propensity to drool. She is my mother.

Two weeks ago, I was talking on the phone with a potential landlord for a summer sublet when he asked if I had a dog.

Half of the people I know don’t think of me as a dog owner. These are the people I meet when I am traveling. They get to know me as a blur of movement, and that blur does not seem to have room for a pet. Back at home, in my other life, I have acres of room, and I have Osito.

Osito is sick. He had a 3”X1”X1/2” tumor removed from the underside of his tongue on Monday. Now we’re waiting on results from the biopsy as he re-learns how to eat and drink with only half of his tongue. He leaks, a lot.

Even as I write this, there is part of me that feels I should apologize to you. He’s just a dog, I feel like telling you, and me. Dogs, we all know, (and as I just wrote about recently) die. Statistically speaking, they live less than a quarter as long as humans. I want you to understand that I know this is a normal progression of life. And then I want you to explain to me why it still feels so damn hard.

I had never planned on getting a dog. Not having a dog was a part of my personality, and a part of my pact with my ex-husband. Back when we were dating, we were hiking down from a day of climbing on Snow Creek Wall in Levenworth and had entered the normal people radius. Perfume, deodorant, bling…and dogs. There must have been one dog that did something particularly egregious—bark, poop on the trail, drool—and it was enough to prompt Eli and I to each offer, and confirm, that we would never have a dog. I remember tromping down the last mile on packed dirt and thinking this was yet another way in which we were perfectly compatible.

Two years later, we got Osito. To be fair, it was my idea. I was laid up from car accidents and the life I’d planned, of conquering the world while climbing and guiding, suddenly looked a lot more like going along the world while walking and hiking. I wanted a companion. I wanted a poodle.

My family had three of them in different heights and dispositions.

My reasons were simple. They were the best dogs. They did not shed. They were what I had wanted. Eli protested to the very end, and even said, in his final plea for dignity, “If we have to get a poodle, can we at least call him a Portuguese water dog?”

That was nine years ago. My life has done nothing but change since. Home, partner, job—they’ve all fluctuated. But not the poodle. He is the tentacle that stretches backwards into every versions of my adulthood. No other friendship or relationship even comes close.

I’m not someone who exudes a traditional sense of stability, or projects the desire for it. But that doesn’t mean I don’t appreciate it. Growing up, I used to look at adulthood as a fixed entity. (This was an odd perception given a childhood during which my parents divorced, moved, and remarried.) In my mind, I would become an adult and it (life, change, any of it) would be done. Maybe it was a desire to speed up this process that had me get married at 21. And maybe it was the same desire that had me build the heaviest and most permanent house I could shortly thereafter.

Back then, I would have never thought that a squirming bundle of black fluff would end up having more of a presence in my life that an eighty-ton house or a seven-year marriage.

I know that my emotions about Osito’s lack of permanence are linked to other choices and decisions in my life. I know that learning about his illness during a summer marked by loss of life makes the news even harder. And I know that when he no longer with me that I will find new and surprising ways that consistency and movement work in my life. For now though, I am marking the mooring he provides my life. Maybe it isn’t normal for your dog to anchor you. But then again, he’s not a dog. He’s a poodle.