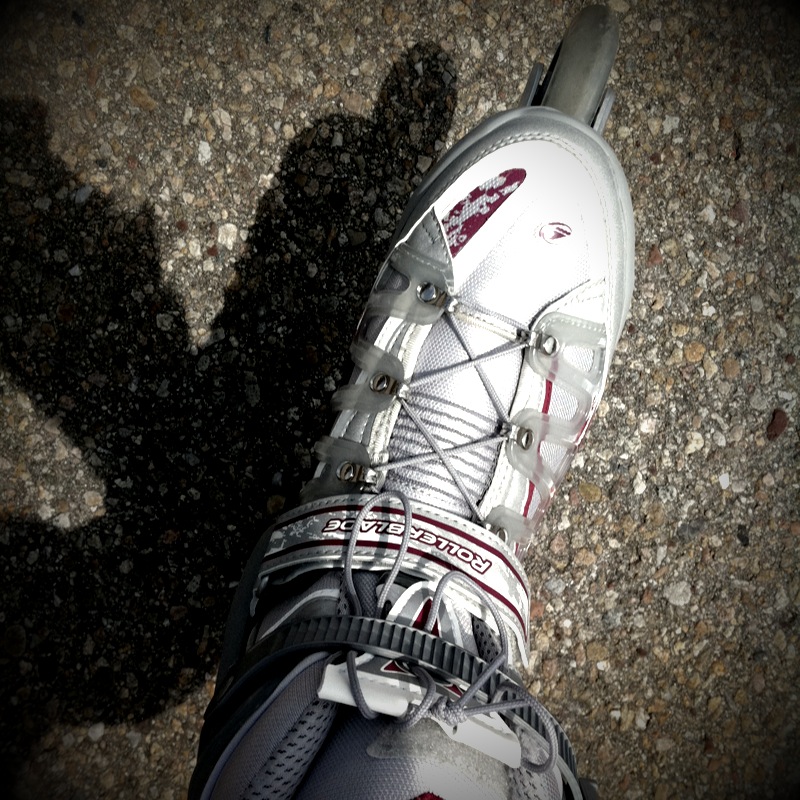 An Additive Adventure Entry In Conjunction WithOutsideTV.com and Osprey Packs

It’s taken three months, but it’s happened. I was spotted.  Rollerblading.  It was just as awkward as it sounds. I was skating on 30th, or trying to skate amidst the gravel byproduct from recent construction. I rolled past a woman walking on the sidewalk and was just about to turn up my shuffle when her voice cut into my head.

I’d like it to be known that I could I have run—skated—away. I have those skills. But I stopped and talked shop. Yes, I was rollerblading. Sarah was going to yoga.  Did she ever blade? No. Want to? No. And so it went until we said goodbye and I took a hard left to hit the bike path. My new pink rollerblades are fast on the downhill and as I leaned back on my right brake I realized my opportunity. I could save the situation if I did something cool. But I didn’t know how to do anything cool on my skates, and so I just made sure not to fall.

It’s cascading. A neighbor was home the other day when I was navigating the eight steps from my front door to the street in my blades. He tried to be polite and look the other way, but we both knew what I was doing was best left without comment.

It wasn’t like this when I was rollerblading in the winter.  There were 80% fewer people on the trails and I could easily hide behind my hood, neck warmer, and goggles. But it would not be safe to go out with that much coverage in summer. Heat stroke on wheels is not what I am shooting for. Majka Burhardt climbing in May in Golden, CO. Photo by Peter Doucette

I am a climber. I became one twenty years ago, in part, because it was cool. I know I’m not supposed to admit this after all this time, but climbing still feels cool. I think it has to do with the gear. It’s bright and metallic with cables and colors and clanging panache. All of those things were what drew me to the sport—the adornment of them, and, moreover, knowing how to use them. It wasn’t fully conscious at the time, but I knew that if I owned all of that gear than I might just also know how to be in the mountains.

Of course, having gear you covet does not amount to having any idea how to use it. But having gear you are ashamed of does little good either. I remind myself of this every time I go rollerblading.

I’ve gotten some help with the new pink blades. A lot has changed in the 21 years of skating technology. I now have a brake, for example. Wheels, as it turns out, start off even and equal. And pink does make most things better. Except, I have found out, when paired with a red helmet. It might be the helmet that’s taken me over the edge. Or the wrist guards. Regardless, I’m kitted up when I hit the trails.

Maybe rollerblading is not the standard measure of health. But it is my measure of freedom. So today, I will go out skating on the trails. Tomorrow I will be rock climbing. I am strong again, and getting even stronger. I am appreciative of any activity I do. I am constantly surprised by how much can change with time. Who knows what this will all mean in the end. I might spearhead the off-trail-rollerblade-climbing approach revolution. I might get a new pink helmet. I might blade and climb and climb and blade and be cool and uncool over and over again until I can’t tell the difference.