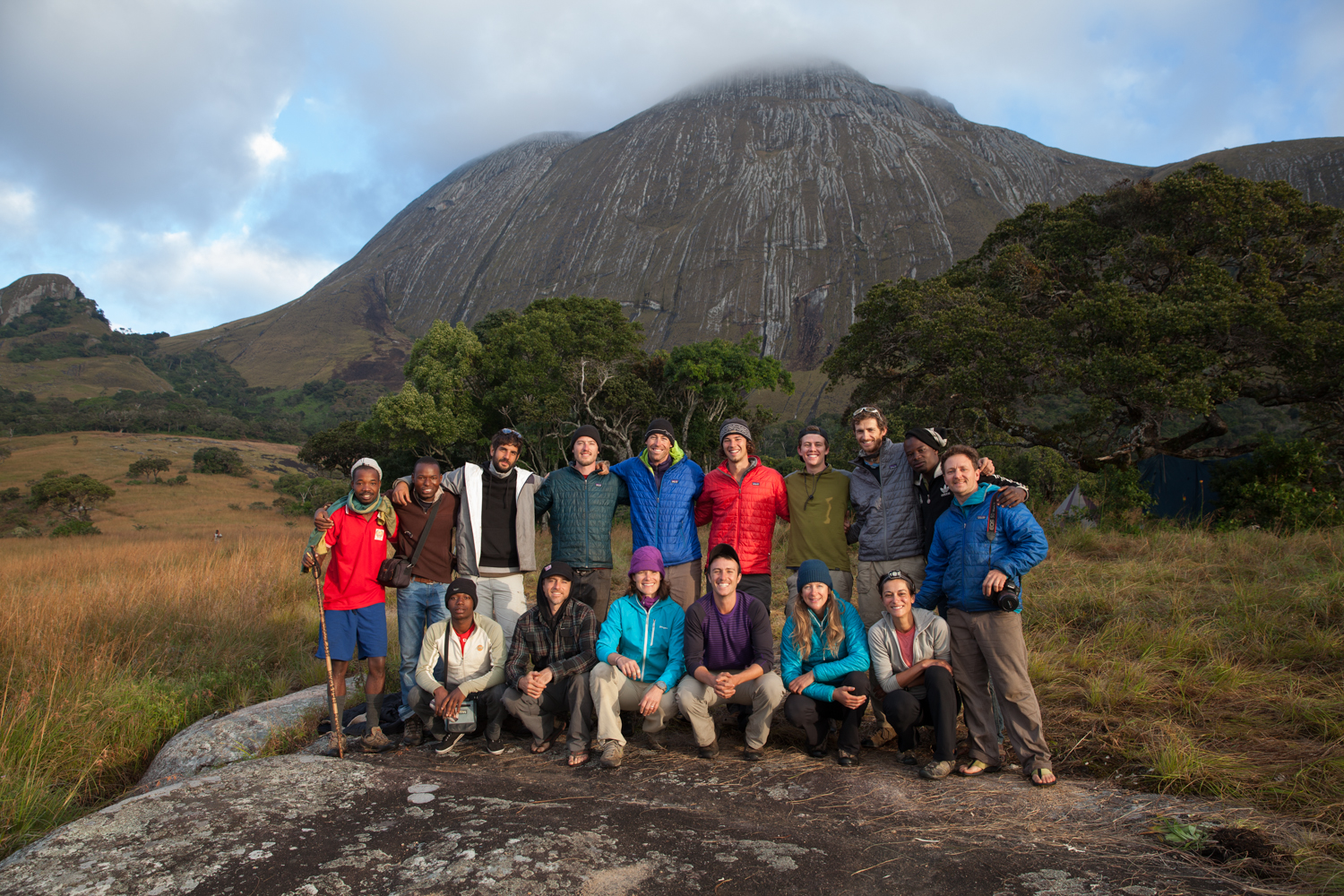 PRESS RELEASE: Gurue, Mozambique –June 4, 2014 –An international team of rock climbers, entomologists, and herpetologists gathered on the summit of Mt. Namuli, Zambezia, Mozambique on May 27th at the culmination of the 30-day, 18-member Lost Mountain expedition. Three of the team members reached the summit via a new technical rock climbing route (Majka and Kate’s Science Project IV 5.10-) and ten team members via a variation on the existing hiking route on the mountain’s east ridge. On May 28th, the group visited the village of Curruca, near the base of Mt. Namuli, to join local community members and representatives from LUPA, the Lost Mountain’s Mozambican conservation partner, for a celebration of dance, music, and presentations about the science, adventure, and conservation findings of the expedition.

“It was incredible to stand on the summit of Mt. Namuli with so many of our team members. Seeing 360-degrees of the majesty of the region spread out below us was the perfect realization of a four-year dream and the crazy hard work and commitment it took everyone to accomplish it,”expedition leader Majka Burhardt said.

“One of the highlights of this expedition were the sounds that came out of the woodwork,”musician and sound recordist for the Lost Mountain expedition Jacob Bain said. “From sharing moments with local musicians in Malawi and Mozambique, to recording the sounds of nature on the mountain, to the stories that each of the members of the team and the Curruca community shared, there is magic in the melodies and words of Mt. Namuli.” Days before the team gathered on the summit of Mt. Namuli, Majka Burhardt and fellow professional climber Kate Rutherford completed the first ascent of a new technical climbing route on the southeast face of the mountain.

“The climbing route was established to connect scientifically interesting zones on Mt Namuli,”Burhardt said. “Our team of scientists—Dr. Flavia Esteves, Caswell Munyai, and Harith Farooq—prioritized a hanging pocket forest at 1,600 meters, a vegetated chimney above, and the higher altitude sedge communities near the 2,418 meter summit.”

The climbers first established technical access to the hanging forest and then linked the other features to the sedges on the high slab ridges stretching to Namuli’s summit. The resulting climbing route, Majka and Kate’s Science Project (5.10-, IV, 12 pitches), is the first technical route on Mt Namuli and was established both in the name of research and with the intent to create a compelling climbing line up Namuli’s southeast face. Over the span of two weeks, the whole team used technical access to explore the pocket forest and ridge, Dr. Esteves also joined Majka and Kate to collect ants on Majka and Kate’s Science Project, and LUPA conducted interviews and surveyed natural habitat impact with the Curruca community to create a baseline integrated conservation report for Namuli’s future.

Summary of the preliminary expedition outcomes: