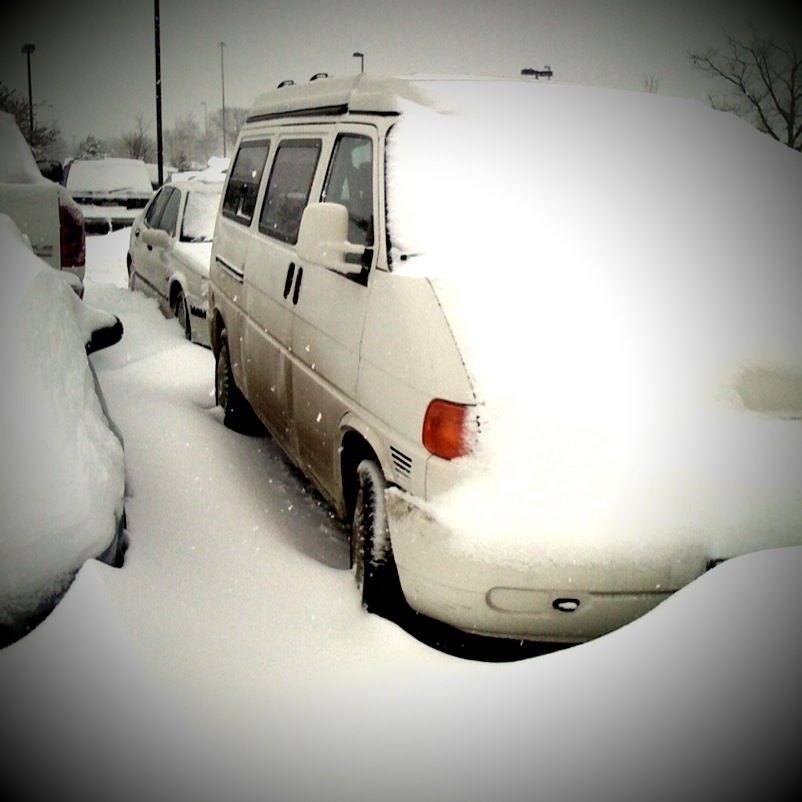 I started skipping winter without knowing it, a few years back. Today, 1.5-inches of rain into the New Hampshire afternoon, I’m making up for what I missed. The poodle has to go outside to go to the bathroom, and I promised him I’d take him once the rain let up. That was three hours ago. I’d let him out to go by himself, but all he’d do is wait for me at the top of the stairs, his back right leg permanently kipped up in protest against the pain.

This dog is teaching me lessons. They likely all do. Three weeks ago, I held all 60-pounds of him on my lap in the vet office in North Conway. The last time we were there was ten months prior, for what turned out to be a floating bone in his neck. When Dr Alfred asked this time how we are, I tried to let the information out gently. In between talking about Osito’s sudden limp and the skiing that day, I let it slip that he was diagnosed with cancer.

Later, I called three different vet offices to all fax their records over. I pictured a giant spool of information finally coalescing in New England. Surgery in Jackson, check ups in Boulder, drugs in Bozeman. I didn’t even tell the vet, himself, about Bozeman, I just tacked it on to the list for the receptionist, hoping no one would notice what suddenly seemed to be not, as I had envisioned it, the perfect life of a poodle who got to join his mom in the world, but the clear trail of evidence of a poodle trying to keep up. A week of leashed walks, no deep snow, and opium (for the poodle) later, I left North Conway at 3:30 am and headed east to go west. I distrust anyone else who is driving at that hour. I always want to know where they are going and what business they have. But that morning, I am the one with faded license plates from 2200 miles away affixed to a large white van.

I listened to a rocky mountain serenade compiled by my Montana mother who wanted me to move to Bozeman as I passed towns I still cannot pronounce like Ossipee and Moultonborough. The aussie man on my GPS had a better new England accent than I did and I muted him in retaliation.

When I was seven, my father married my stepmother. I sang Don’t Fence Me In at their wedding. In someone’s defense (mine? theirs? the piano player’s?) it was one of my best numbers at the time. I repeated it that morning on my mother’s mix. I repeated it again for the rest of the ninety-minute drive.

Twelve days, three speaking events, one Waypoint Namibia film premier later, I came home to New England. I knew I was home because I have a toaster oven. I would never buy one, but the beauty of renting your 6th home in a year is that you’ll eventually have one anyway. The poodle, with his limp and his chemo greeted me at the door. His regimen of eight pills at three different daily intervals was chronicled in the spreadsheet I’d printed out as a checklist when I left. According to the vet, the poodle should have been putting weight on his back leg by now. Instead, he had perfected the hop-along canine routine. Within days we were back at the vet clinic so that I could understand just how to be a mother to a cancer-fighting poodle with a bum knee.

Waiting in the office, I looked at Osito and asked him what he wanted. Would you be a happier poodle out west? East? Here? There? With each place I offered, his head tilted a bit more. Sri Lanka? Could he even see me through the tunnel of hair surrounding his eyes? By the time Dr. Alfred came in I had embraced the life stability that would come from the poodle’s terminal cancer. I pictured one home with one bed in which he would be surrounded by endless stuffed jungle animals to accompany him during his last months.

An hour later, the poodle was knocked out with a metal bar spanning his mouth. Dr. Alfred pulled out his tongue and Osito’s eyes rolled back. There was no more tumor. Not to the eye. Terminal cancer was suddenly conditional.

On the drive home I started up the CD player and Bing sang us home. It’s been twenty-five years and I still had no idea what a Cayuse is. I sang it anyways, and when I got home, I carried the poodle up the stairs and cut the hair around his eyes, going too close so that he now looks constantly surprised.

That was three days ago.