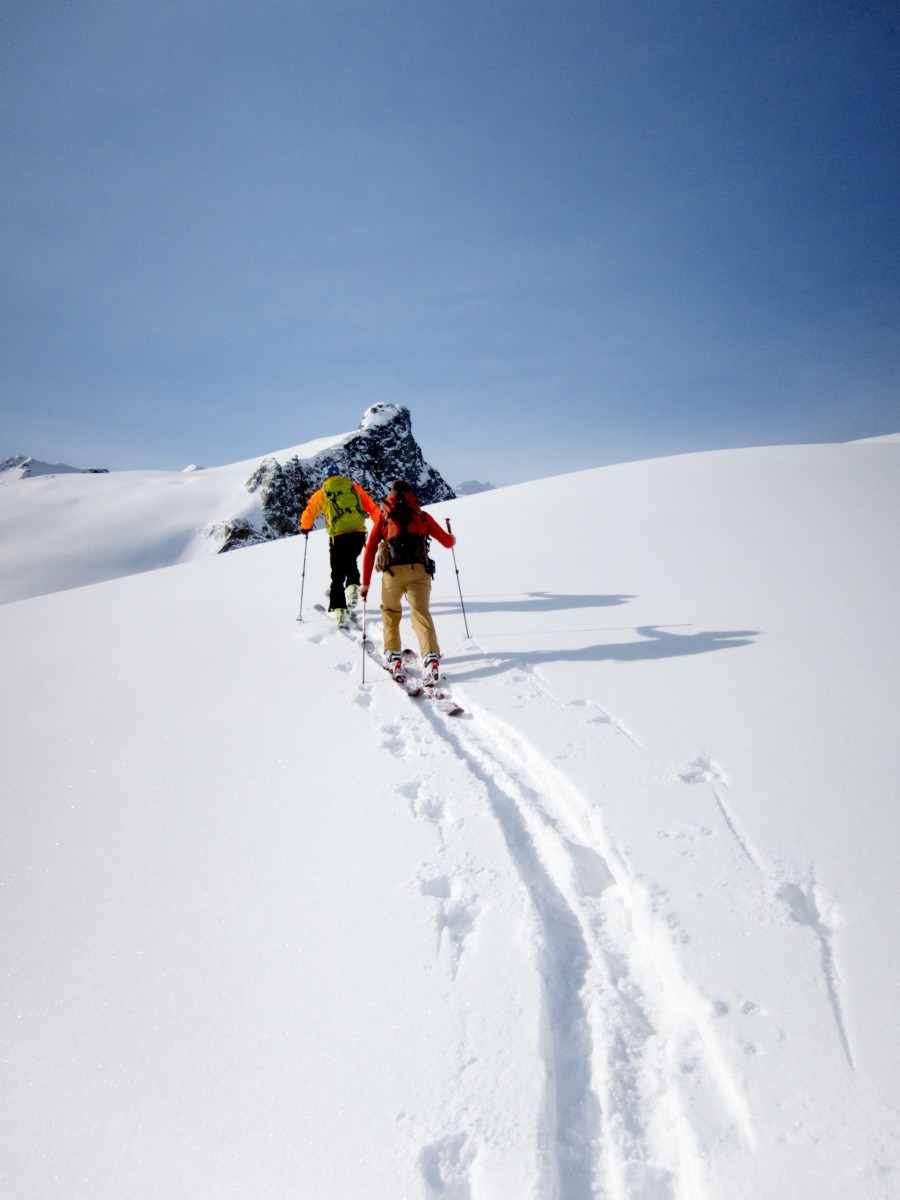 Turn Madness in the Adamants, BC

An Additive Adventure Entry In Conjunction WithOutsideTV.com and Osprey Packs

It’s hard not to like powder. It’s even harder not to like it when you are an outdoor athlete. If you are faced with this situation, my best advice is that which I have taken for twenty years: l lie.

It’s easy. When people talk about face shots, ripping the pow, shralping the gnar, just imitate the speaker. They will be nodding and smiling and have a glazed look in their eyes. Follow along. If you are lucky, this will work until one of three things happens: 1) you learn how to like powder for real, 2) you convince everyone else how much fun hard-packed ice is, or 3) you are forced to confront your own illusions while skiing in Canada’s Selkirks.

I have a knack for total immersion when handling my own self-development. And so, when the invitation came to join CMH Heli-Skiing for a heli ski tour trip, and the article lined up (see Skiing Magazine this fall), I knew the time had come. One way or another, I was headed into pure powder for a week of skiing. Something was going to have to give.

I won’t tell you about the first few days. Let’s just say I was getting it, slowly. I was getting it enough to have a few people suggest I step up my skis—into an actual pair of powder skis. A woman Mary had a pair that would work. They fit. And so one day I took them out to the heli pad in the morning and seven minutes later stood on top of a 700-meter run, stomped in, pointed them downhill, and waited for the magic.

The magic appeared, within two turns, in the form of a face-packing header into the powder. Lawn-darted in the side of the slope, I spun my legs up to find the pull of gravity, confirmed my skis were on based on the weight of my legs, and used them to propel me upright. If this was ripping powder skiing,I thought, I’d actually been doing it for years.

The rest of the descent was not much better. I never saw the tips of my skis for the entire 700 meters, and fire dragons attacked my thighs without mercy. My whole body felt constantly at the ready for a forward somersault. I indulged it with at least three more. It was 10:00 am and I had a whole day to go. The secret to being a great athlete is having a list of excuses always at the ready, but never using them. I had plenty of excuses built up by the time I got to the bottom of the day’s fist run: I grew up in Minnesota, powder made no sense, my father was Polish… I didn’t want to use them. Really. But when I got to the bottom and saw everyone else smiling and laughing and talking about how good it was, I had no choice but to be honest. Cindy asked me first. “How are the new skis?” Her smile was so big and expectant it broke my heart. But I had to tell the truth.

“I think there might be something wrong with them,” I said. “Or with me.”

No one believed me. Who could blame them? Powder is like religion—either you get it, or you will get it, but no one can do much to speed up you conversion, they can just pity you during the process. But even that much pity can get uncomfortable, or at least it did for Dave. He skied beside me part way down the second run. I’d had the whole two-hour skin up to the summit of Silk Road Peak to psyche myself up for success, and did at least get four turns in before this runs first disaster. Dave caught up with me after my third.

We talked about gravity. I picked up my ski. Dave leaned in to look at it. He leaned in closer. “Been jibbing lately?” he asked.

Mary’s, and thus my, skis were mounted for park tricks. The bindings were set another 1/3 forward to give good control for all of the twists, flips, and daffys I was sure to huck in the Selkirks. I stood sideways on a 30-degree slope and tried not to fall over while I absorbed the news.

Dave Levinson is a good man. At the bottom of the run, he gave me his skis. I slipped into his Liberty Double Helix’s and he took the jibbers. “Those are 121 underfoot,” Dave said, as if this would mean anything to me. Majka Burhardt. Getting it.

And it didn’t. Until it did. The last run of the day was a 1200-meter descent we’d earned from another tour up and over a pass and onto another peak. I stripped my skins, locked in my heel, and hit it. Halfway down I had to stop. Not to rest, but to spout words like dreamy, creamy, sickbird –all of the words I’d heard everyone else spouting for years and assumed were bs. And now they were coming from my own mouth. It didn’t stop. The turns kept coming. I was mesmerized by my skills. I was mesmerized by Dave’s  skill skiing the jibbers, and also temporarily horrified by his spectacular crash. I stopped for him, but he waved me on. As I said, he is a good man. He is a man who made me love powder.

It’s a week later and I am home in Boulder wondering if it is too soon to buy next year’s skis. I get it. The fat/phat revolution. I’m in. I’m converted. I like powder. It only took me 26 years. Now I’m ready for the next 26 and to ski without the lie.