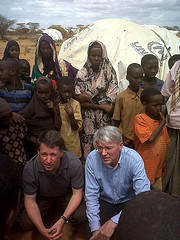 A guest blog by Majka Burhardt on Frederik Allen’s Leadership blog on Forbes.com.

There is famine in the Horn of Africa. Of course. Isn’t there always?

Are you cringing yet? Good. Here are three things we can do now to help the Horn of Africa, beyond just sending famine relief: (1) Change the conversation. (2) Invest in the positive. (3) Tackle the uncomfortable.

The news from the Horn of Africa today is horrific: Drought and famine are spreading throughout the region, exacerbated by the derailment of aid shipments by the militant group al-Shabab, resulting in tens of thousands of deaths with little resolution in sight. As global citizens we need to know this. But I’m worried about the way we are learning it—from reports with the news truncated the same way I just presented it. Though the facts may be accurate, their wholly negative and abbreviated presentation unwittingly creates a future for the region that is overly linked with its past. Let’s change the conversation and help create a new future. Talking to people afflicted by drought. Image by DFID – UK Department for International Development via Flickr

What I discovered in researching my recent book about coffee was Ethiopia’s incredible biodiversity in terms of what is the second most valuable commodity in the developing world. With that biodiversity come cultural stories that connect consumers to their daily coffee in ways that create emotional and economic buy-in. Companies of every kind can turn up the volume on these stories and create direct change.  Those in the beverage industry can tell stories about their products and increase their support for Ethiopia’s most valued crop. Companies that use coffee (and who doesn’t?) can use their buying power to demand those stories and that support.

There is enormous opportunity here to rewrite the long, sad story of famine and turn it into something much more promising and much more accurate for the Ethiopia of today as it becomes the Ethiopia of tomorrow—using Ethiopia’s own resources. Ethiopia is not Somalia, but all of the countries in the Horn of Africa are being lumped together in the current headlines in a devastating manner, in part by association and in part because the very real drought does cut across national lines. The Horn is a region of more or less than a million square miles with between 100 million and 200 million people, depending on how you define it. The region’s entire story is much more complex and ultimately hopeful than just the famine. Focusing on only the famine is like saying that all of Europe is financially and morally bankrupt just because of the recent doomsday chatter about Italy.

Let’s enter the conversation and shift its direction by being specific and addressing the region’s potential while bearing witness to the horrific. Let’s make good business decisions that support growth and call attention to those actions, giving the countries, commodities, and organizations involved their due.

(2) Invest in the positive.

Famine relief is vital and important, but it addresses only famine. Every country in the Horn has dozens of cutting-edge programs that tackle education, health care, clean water, transportation, agriculture, and more. People need to survive the famine to take advantage of those programs, but the programs also have to be there to eradicate the ongoing cycle that created the famine. Companies have a unique opportunity to not just change the conversation, as mentioned above, but also financially and promotionally support the work that is already being done. Find an organization that fits your corporate mission and vision, such as imagine1day, the Fistula Foundation, or Partners in the Horn of Africa, and help it tell its story, with media and dollars.

Putting dollars and time into these programs does not diminish the importance of the famine; rather it increases our support of the region in a way that allows it to be a vibrant player in its own future. Together we can change the global profile of each of these countries and move away from aid and into a global conversation about opportunity.

None of this works unless we acknowledge what we are doing. Just starting a new corporate initiative or media campaign about what is great about the Horn of Africa will not cut it. We need to talk about the good along with the bad. The news has more power when the good and bad are intertwined than when they are held apart.

Businesses often focus on creating a solid stand or a single voice. That might seem safest. But it’s not. It’s far more engaging to be willing to have an uncomfortable discussion about what is working and what is not working. How we do this in business sets the model for how we do it in global identity building. In this case we must do so for the sake of the identity of a region that has already had it far too hard.

Be a leader in fighting off the stale conversation that leads to news fatigue about the famine. Create new possibilities and link people with the real facts. Some 29,000 Somali children have died from the famine in the past three months alone.  The bad needs the good. We can create the good.