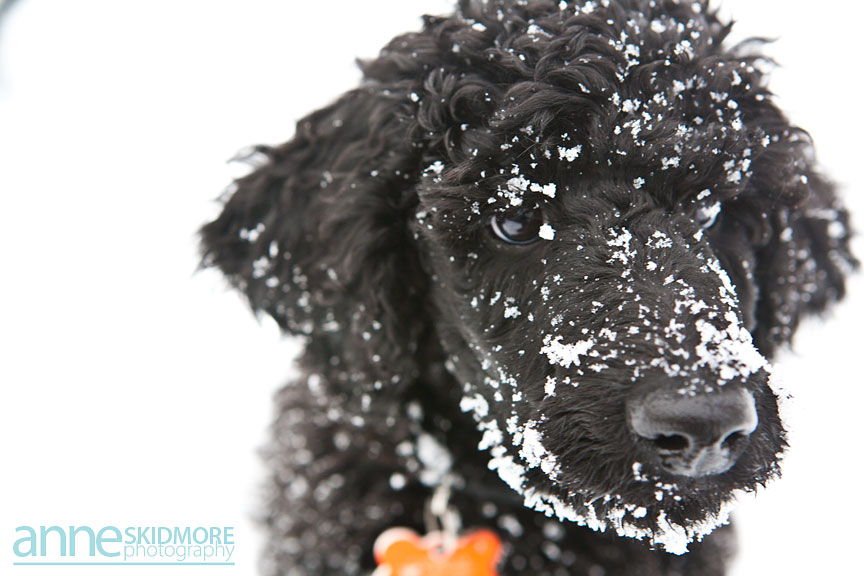 There are dog people, and there are poodle people. I am a poodle person. But for the past year, I’ve been a poodle person without a poodle. That was a problem. Said problem manifested in scenes similar to this one:

At 3:00 one afternoon in Boulder I spotted a woman with two standard poodles—one black, one gray– starting off on the hike I was just finishing. I walked up to her. She was on the phone. It seemed she was all right with me petting her poodles, and I thought I checked to make sure before I dropped to my knees and starting loving them both, tucking one into each arm. This went on for several minutes until I heard a distant voice that I soon realized was the woman, talking to me, instead of her phone. “You must like dogs,” she said.

The black one, by then, was permanently attached to the space between my elbow and ribs. I may or may not have been making plans to take him home.

“Have you ever had one of your own?” The woman asked. The world swirled in front of me. Both poodles leaned in closer. I coughed. I made that horrible noise when you pull the snot back in your throat. I thanked the universe for making poodle hair absorbent of human tears. “I lost mine,” I tried to say to the woman, “in February.” I looked up when I said February. The woman made eye contact for a moment, gave her two dogs a tug, and walked away.

Now, I don’t blame the woman. She had a crying snotty poodle-missing stranger fall apart in front of her on the public sidewalk. While I watched her walk away I finally acknowledged to myself that I had a problem. If you google “Poodles in Africa” the results are slim. Most hits are for poodles in South Africa, but few to none are of poodles in Ethiopia, Mozambique or Namibia. This is a problem. This is likely why, when people know of my work and learn of my need to have a poodle they make that awkward concerned face the way the would when a six-year-old tells them they want to have a unicorn.

You can’t organize your whole life. I had Osito for almost 11 years. I would have had him for 111. My life is less complicated without a poodle. But that’s not a life I want to live.

Osito and I talked about this all. We had a deal. He’d be the best poodle in the universe and when he had to leave, he’d help me find another one. Back then, the next poodle was going to be Hank or Buck, but as it turns out, he’s Ptarmigan. Like the bird. So now I have a bear in my soul and a bird in my life and both in my heart. Ptarmigan and I are a month into our lives together. He is 12 weeks old tomorrow. He likes to sleep on top of the airport carrier that carted him from Wisconsin, through Michigan, to Maine, and finally to me in New Hampshire. It’s clear he is still trying to understand the massive journey in his life. I know the feeling.

I tell Ptarmigan Uncle Osito stories every day. They are different poodles—they need to be. I spent 12 months and 5 days without either in my life and I learned the following: life is short, get a poodle. I promise it will make you a better human.