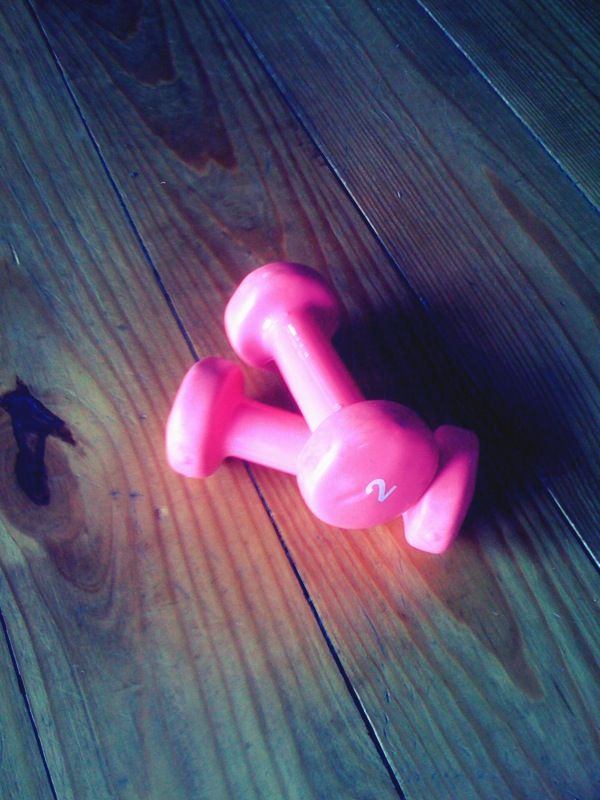 In my mind, it was in the middle of the Miss USA pageant when I first saw the ad. A cadre of young girls in leotards burst through a door and waved ribbons and moved their arms around with weighted wristbands. It was horrifying, even without the music.

“Get in shape girl, you know the feeling.”

“Get in shape girl, it’s so appealing.”

I was seven. It was right around the age when I cornered Reed in the coatroom and pinched him for saying mankind instead of humankind. I have no idea where this behavior came from. Nor do I understand why it was ok in my mind to watch the Miss Universe pageant and keep my own score (I was convinced the judges had it out for us Midwesterners), but the actions of Hasbro Toy Company were offensive. Fitness in a package? In the same aisle as Barbie? (In the same aisle as the Barbie I wanted?)

Today, over 25 years later, I bought my first set of 2 pound weights. Pink ones. It was all they had. They are all I am allowed to use, for now. Currently, I lie on the floor and wave them around above my head, hips, I make snow angels on every imaginary plane intersecting my body. If I move them for long enough, I am convinced, I will feel something. Next week, I take off for Mountainfilm in Telluride.They are showing Waypoint Namibia. Last year, at the exact time we’ll watch the movie on the big screen, the real thing was happening. Last year, right now, I was in shape. This year, I will tuck my pink weights into my luggage and fly to Colorado. I will wave them in the air every morning and night of the festival. I will not walk around town with them. But not because I would be too embarrassed. I’m just not allowed to yet.

I’ve grown up. I don’t pinch people who say mankind anymore. I understand that sometimes, we all need the pink weights. We need them to get back to our lives—to carrying poodles up stairs they are too scared to climb, to carrying ourselves to the places we want to understand, to carrying our lives forward. There’s a face in Africa that’s caught my eye, after all.

*Miss California, Julie Hayek, won Miss USA in 1983. No midwesterners were in the top 10.

**If you absolutely have to, you can see the original here. But I wouldn’t advise it…